Resolve your testnet ENS on mainnet (or vice-versa) with CCIP-Read.

istest.eth is a lightweight implementation of CCIP-Read ‘Off-chain Lookup’ that allows resolution of your testnet ENS name on mainnet. For example, users with an ENS name name.eth on a testnet (say Goerli) can now gaslessly resolve all records of name.eth on mainnet subdomain name.istest.eth. The testnet is mapped to mainnet by the CCIP-Read Resolver contract deployed on istest.eth mediated by a HTTP gateway. istest.eth is proof-of-concept of a contract that maps ENS records from one network to another. Naturally, the two participating networks can also be mainnet and an Ethereum L2 for example, or any pair of compatible networks. For instance, istest.eth has also been deployed on Goerli where it maps mainnet ENS records to testnet.

We realised the need of testnet → mainnet name resolution when building a subdomain-based community project. For instance, imagine a subdomain membership club built on vitalik.eth where subdomain holders can access their membership page at nick.vitalik.eth and interact with other members of the club through their subdomain page. Such an architecture will ideally consist of a common default contenthash deployment for all holders, with individual pages accessing the window.location.href property of subdomain hosts (i.e. nick.vitalik.eth) and rendering content accordingly. Testing such an architecture turned out to be an unecessary challenge since we couldn’t resolve testnet contenthashes on ETH.LIMO gateway (since ETH.LIMO only supports mainnet). This led to the idea of a testnet → mainnet mapper which would allow us to resolve testnet contenthashes on ETH.LIMO for testing. Similar situation arose in another project where it was necessary to import the rich registry of ENS from mainnet to testnet for appropriate test environment recreation.

istest.eth CCIP architecture has signtaure verification feature built in, meaning that all responses from the gateway are authenticated by the contract before resolving the requested name. The underlying resolver contract is fully modular, meaning anyone can ‘blindly’ fork their own version on mainnet and change configurations post hoc according to their needs. A summary of the workstream is as follows:

The schematic of the algorithm with Goerli as testnet is shown below: 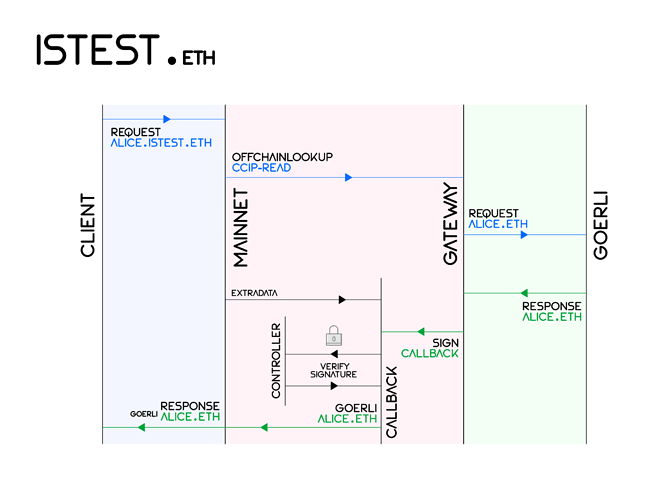 Node.js scripts for running multi-threaded gateways as well as source code for the contract are available on GitHub

There is currently a bug in ethers.js implementation in Node environment which is prohibiting contenthashes from getting mapped. This bug had previously been reported to ricmoo.eth & ETH.LIMO and fixed at that time, but it seems to have reappeared. We are in touch with ETH.LIMO about this issue and expect this to be resolved soon.

Hi @istest, after doing some troubleshooting it looks like the issue is related to the certificate used by the CCIP gateway: sshmatrix.club. You should try including the CA and intermediate certificate in the response. Let me know if this doesn’t work and we’ll dig in further.

Thank you for the help. It was an easy fix