Given that I’ve written an entire book on cancel culture and deplatorming attacks, I feel somewhat compelled to weigh in simply to remark that these kinds of episodes overall do more damage than good.

The way everybody involved in this DAO should be treated and evaluated, even those in positions of stewardship, is by their actions, contributions and behaviour. The only judgement any of us can render toward anybody else can be informed solely by our interactions with them. (I know in our case, Brantly was instrumental in helping us develop the integration that helped bring ENS to legacy TLD domains).

The reality is, there are people around you, some whom you may interact with every day, who hold some belief that would make you throw up in your own mouth. And you may never know.

It get’s worse: You hold some belief that would have the same effect on somebody around you.

The expectation these days that everybody you interact with has to have the same moral code and belief system as you or be ejected from society is not only unrealistic, it’s toxic.

Alas, we live in the internet age. Never before in history has the membrane been between our most fleeting, primal, emotionally charged thoughts and the digital commons been so ephemeral and thin. It leaves us open to being forever defined by our worst moment or controversial belief rather than by our best work and loftiest aspirations.

It is not only possible, it’s critical that we be able to interact and coexist with those who think differently than we do, provided everybody treats each other respectfully and with civility. In Brantly’s case, it doesn’t appear as though there were any issues with his conduct at any point. Nick has said as much in his post on the matter.

It was a horrible hot-take, five years ago. Apparently there was a spaces meet over it and Brantly apparently “doubled down”. I wasn’t there, I don’t know what happened, but I can say this:

I’m probably one of the oldest people here. I’ve seen this sort of thing over decades, and watched it intensify, and I know this:

…, and I also know that all “victories” are pyrrhic ones. If we allow a climate of cancel culture to thrive then eventually it will wreck the DAO. Guaranteed:

“You will follow us up these steps”, an unfortunate Girondist shouted at Robespierre as he was herded toward the guillotine. And he was right.

Before you vote to effectively neutralize all of Brantly’s contributions to ENS, I ask you to do the following thought experiment:

Imagine that for whatever reason, Brantly isn’t voted out and he stays in his current position.

Would you feel strongly enough about it that you would leave the DAO and cease your work on ENS?

If not, that means the work being done here is more important to you than the worst attributes of a single contributor (albeit a core one).

If you’re one of the people deeply hurt or disappointed by this, but you can get your own mind around it to a point where you really don’t care what Brantly thinks about anything other than ENS, then you will be better off for it. Don’t do it for him, do it for yourself and for your own mental serenity.

This is somewhat of a leap of faith to make. All I can say is if you don’t make that leap, you are setting yourself up to be miserable. You have no control over what anybody else thinks. You can only control whether you’re let it get inside your own head.

Think of the DAO. Think of ENS. Think of where you want this project to be in one, two, five and ten years. Evaluate Brantly based on what he brings to this project, what he’s accomplished and what he can contribute to the larger goal of the DAO.

This is not “cANcElinG”. This is you watching a DAO working as intended, actions have consequences. No one is upset and wanted to kick out Brantly because he is a Catholic, the reason why this happened is due to his comments made over the past 24 hours, and also doubling down on it after being called out. Brantly could’ve apologized for the comments he made but not only he did not, but in fact, doubled down and choose to be a bigot. Brantly is not fit to lead ENS. 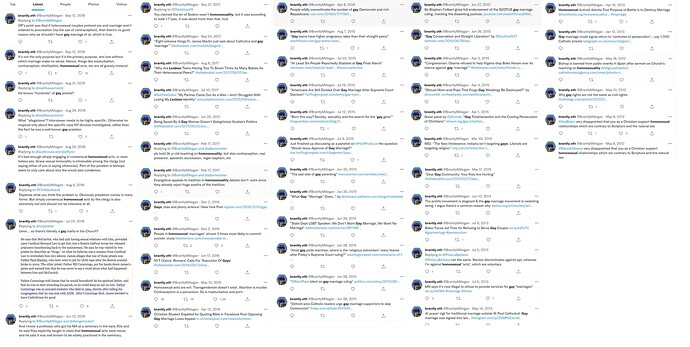 I don’t want to rehash the last couple of days, but ENS or the DAO should not be the arbiter of morality. My concern was not what Brantly said (to which I disagreed) but in he not disclaiming that his views were not those of ENS. As a recognized representative of ENS, it was his burden to unequivocally separate his views from ENS’s core values to the reader, which he failed to do.

Who is canceled? Protocol doesn’t care. He can use ENS like everyone else. He is only being removed from the DOO leadership position for which he is unsuitable, not banished from using ENS. He is still brantly.eth

It would have been better for ENS and, I believe, more appropriate if the DAO sought to put forth a no-confidence vote; and thus, Brantly’s possible removal as a consequence. This would have removed the bad taste experienced within the community about the issue. I firmly believe that many people questioned the process more than the result.

I’m not going to address whether Brantly’s removal was a “cancellation”–people can make up their own minds. It’s time to move forward and put in safeguards to reassure the community of what are ENS’s limitations, which should be addressed in the Community Working Group.

There’s an app called Twitter, he is no longer able to use that.

Twitter is not ENS’s problem. He can use ENS

Unfortunately he violated Twitter’s terms and conditions and they are a private and not a decentralized platform. They are with in their right to do so.