So I have been playing over with the good folks at esteroids who let me beta-test their ENS + IPNS dwebservices, and someone started toying with the idea of sending LN-BTC payment to .eth.limo domains. Couple of days of playing and we have enabled sending BTC payments for some lightning wallet providers. You can find the details at https://stdin.eth.limo (alternative mirror) 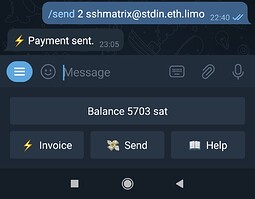 Why am I the first person to comment on this!

I mean, could you imagine if:
The beloved Bitcoin “Lightning” Network
"Worked Better" w/ ENS, than without it?

I also mean, ENS is the:

Wouldn’t it we be cool if we could start using ENS there,
…for those who use the Bitcoin Lightning Network?

This little trick is quite well-received in many Bitcoin circles

There are many good ideas and thoughts hiding in the DAO forum that need only a good eye to pick up. There is something bigger getting built on this idea in the back. More later when that happens

This is great. What do you need from the DAO to help with this?

A small grant would be great to push this further and start contacting Lightning providers to allow for possibility of ENS integration. Not all lightning wallets work due to metadata issues that are easily resolvable. At the core, this trick is a bridge between the identity layer of Ethereum (= ENS) and the self-signed identity layer of BTC (= Lightning). Yes, it is indeed ultra cool. The idea itself came from one of our Esteroids team members. I implemented this for Tezos as well, but that’s irrelevant.

In practice, with the current state within the DAO, any proposal coming from independent contributors gets trashed upon largely by TNL staff who seem to be hell bent on gatekeeping development while easily securing $250,000 for travel. I cannot imagine asking for a cent here because I know what will follow, and I am not the only one. There is a plan to initiate the ENS Small Grants project for grants between 2-20 ETH by the Public Goods WG but that has also fallen off the radar post-funding. So I do not know what the DAO can do (or wants to do). There are many more squandering projects for the same reasons.