This proposal is seeking budget to pilot a series of Twitter spaces hosted by ENSpunks.eth & a co-host in which a FRM athlete onboarded to ENS would be featured as a special guest during live sporting events, specifically, National Football League (“NFL”) football games & Ultimate Fighting Championship (“UFC”) PPV fights.

These spaces would not only serve as a way to onboard athletes to ENS, and give the ENS community a way to interact with athletes during live sporting events, but these spaces would bring the fan base of the athletes & sports world in general into the ENS ecosystem where they can be introduced to ENS & onboarded live during Twitter spaces including potential ENS giveaways from athletes to fans.

In consideration of the work completed thus far and the Public Good of onboarding major athletes to ENS ensuring FRM has the names of their major athletes, ENSpunks.eth respectfully requests a grant from ENS DAO to pilot the proposed ENS x Live Sports Events Twitter spaces.

In addition to FRM owner AbeKawa.eth ENSpunks.eth onboarded UFC BMF champion Jorge Masvidal (BMF.eth) #22 on the .eth Leaderboard at the time of onboarding: 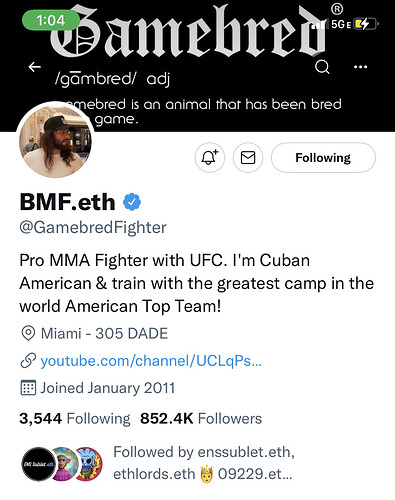 ENSpunks.eth is passionate about ENS and focused on supporting, building and growing the ENS community. In addition to organizing and hosting these ENS x Live Sports Events ENSpunks.eth will organize special guest athletes which include football players for NFL games, and professional fighters for UFC fights.

ENS x Live Sports Events will provide a unique opportunity to connect athletes ENSpunks.eth has onboarded with the ENS community, provide an interactive experience for both athletes and ENS users and deepen the existing relationships within the ENS community.

Athletes will bring their own fan bases into these ENS spaces resulting in significant exposure and opportunity for ENS onboarding of new users during the spaces. Further, the reach of these major athletes has the potential to raise awareness for ENS resulting in the onboarding more athletes and celebrities to ENS.

To date ENSpunks.eth registered FRM the ENS names of their athletes with the following social media follower count and reach:

Excerpt from the ENS DAO Constitution

Article III. Income funds ENS and other public goods
Any income generated to the ENS treasury is to be used first of all to ensure the long-term viability of ENS, and to fund continuing development and improvement of the ENS system. Funds that are not reasonably required to achieve this goal may be used to fund other public goods within web3 as ENS governance sees fit.

ENSpunks.eth respectfully requests that the ENS DAO support ENS x Live Sports Events twitters spaces pilot with a grant for the prior Public Good work completed and the ongoing Public Good to the ENS community and ENS ecosystem as follows:

ENSpunks.eth is respectfully requesting the DAO confirm interest in funding this proposal at which time ENSpunks.eth will negotiate with FRM/the athletes and return to the DAO with a finalized budget request for a total of 2 Monday Night Football games and 2 UFC fights to pilot ENS x Live Sports Events Twitter Spaces to be reevaluated for additional funding following the completion of the pilot.

Strongly support what ENSpunks is up to, and the invaluable steps they’ve taken to date.

The utilisation of spaces (which have proven to be helpful for adoption), punks (proven) skills in communicating & onboarding, and coupling this with sports events & athlete connections enspunks has already made, would be an extremely beneficial outcome for the dao to support.

This proposal would be a first that brings together i) ENS education, ii) non crypto personalities & iii) does so in a setting of sports & recreation. And i trust ENSpunks to steward this creation.

I support this cause. It is bringing together the community while bringing value to ENS.

Further comment,
This proposed spaces, which brings together well known athletes and taps into their follower & fan base, I speculate will have flow on effects to support the initiatives of ENSfairy - to get .eth names in the hands of end users.
My presumption is the reach of a connected group of sports personalities is likely to include other high profile personalities. And such a proposed Spaces will compliment ENSfairy, and support/promote more .eth donations from the ens/crypto community, as well as create that ‘human’ connection for potential recipients to enquire about names.

When I first saw Masvidal rock bmf.eth, I couldn’t believe my eyes since iam a big UFC fan and this puts us both in the same boat AGAIN. Masvidal is one of the most famous and draw in the Mixed martial arts. Jonbonesjones.eth is arguably the greatest MMA of all time and he is another on boarded by ENSpunks.
ENSpunks.eth have onboarded many other athletes and relevant public figures such as sports manager Malki kawa. This proposal is very important since these athletes have millions of fans and when they use their ENS, it automatically raises the curiosity among the fans.
I 100% support this proposal and would kindly ask the DAO to fund this proposal.
Thank you.

This idea is a no brainer.

I too, am in close conversation with an sporting individual who a few people would probably somewhat be familiar with.

And akin to ENSpunks, my motives are purely based upon the fact that we see nothing but potential and possibility, reaching out and offering this knowledge so that other people / sports persons can utilise this untapped technology by “doing the damb thing”! - The money/grant side of things is like water flowing down stream…water needs to be allowed to flow, hold on to it for too long and it becomes stagnant.

As time moves on I am confident that what we do here today is forming small ripples of change across the interWebs. I would now like to present an extract from a speech by a great mind with hope for the DAO and the community to consider:

It is a revolutionary world we live in, and this generation at home and around the world has had thrust upon it a greater burden of responsibility than any generation that has ever lived. Some believe there is nothing one man or one woman can do against the enormous array of the world’s ills. Yet many of the world’s great movements, of thought and action, have flowed from the work of a single man. A young monk began the Protestant reformation; a young general extended an empire from Macedonia to the borders of the earth; a young woman reclaimed the territory of France; and it was a young Italian explorer who discovered the New World, and the 32 year-old Thomas Jefferson who [pro]claimed that “all men are created equal.”

These men moved the world, and so can we all. Few will have the greatness to bend history itself, but each of us can work to change a small portion of events, and in the total of all those acts will be written the history of this generation. Each time a man stands up for an ideal, or acts4 to improve the lot of others, or strikes out against injustice, he sends forth a tiny ripple of hope, and crossing each other from a million different centers of energy and daring, those ripples build a current that can sweep down the mightiest walls of oppression and resistance.

Few are willing to brave the disapproval of their fellows, the censure of their colleagues, the wrath of their society. Moral courage is a rarer commodity than bravery in battle or great intelligence. Yet it is the one essential, vital quality for those who seek to change a world that yields most painfully to change. And I believe that in this generation those with the courage to enter the moral conflict will find themselves with companions in every corner of the globe.

*For the fortunate among us, there is the temptation to follow the easy and familiar paths of personal ambition and financial success so grandly spread before those who enjoy the privilege of education. But that is not the road history has marked out for us. Like it or not, we live in times of danger and uncertainty. But they are also more open to the creative energy of men than any other time in history. All of us will ultimately be judged, and as the years pass we will surely judge ourselves on the effort we have contributed to building a new world society and the extent to which our ideals and goals have shaped that event.”

Let’s Go! This is how big moves are made! I support this and of he needs me on the spaces, I am there! LETS GO PUNKS!!! DAO we need ya!

I know a lot of people who would be very interested in these types of events. The DAO should realize this proposal represents a great onboarding opportunity for the community.

INGENIOUS!!!
This is paving the way for the sports-industry and sports-fans to onboard into ENS. These athletes have incredible amounts of followers and fans and having them be an ACTIVE part of the ecosystem helps non-ENS users engage with the space and potentially onboard. Amazing idea for ENS as a whole!!!

Highly in support of this, although I’m not even into sports. The ENS community Twitter spaces are immensely valuable, especially for those of us with disabilities.

However, I think $1000 per Space requested for hosting is pretty steep. I would think somewhere in the 250-500 per space would be fair.

Love what you do for the community @ENSPunks.eth