Removing brantly.eth as a Community Steward 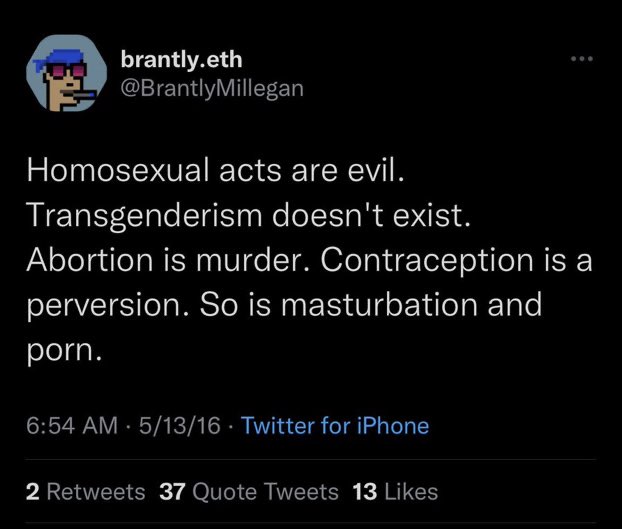 On February 5th, 2022, brantly.eth, well-known as a prominent representative of the ENS protocol, defended these views in a publicly held Twitter space.

Irrespective of one’s personal beliefs, we, as ENS DAO Community Stewards, must set the example for inclusivity and must not divide our community.

Propagating rhetoric that is viewed as hateful and discriminatory is not conduct conducive to the role as a Community Steward. This conduct will not be tolerated despite one’s contributions to the protocol.

In light of the prior tweets and recent conduct by brantly.eth. I propose that brantly.eth be indefinitely removed as a Community Steward.

As set forth in EP4 Specification 9.1.2 Community Stewards may vote to remove a fellow Working Group steward by a simple indicative majority vote.

I am initiating a simple indicative majority vote for @Community_Stewards here:

Should brantly.eth be removed indefinitely as a ENS DAO Community Steward?

Majority, “No”: brantly.eth is not indefinitely removed as a Community Steward. He will remain in place unless a Social Proposal is implemented as outlined in EP4 Specification 9.1.1

Majority, Yes: brantly.eth is removed from the Community Steward role and replaced as defined in EP4 Specification 9.1.5

Additionally, and irrespective of this poll’s results, the ENS DAO will be invoked to consider further action to be made in the best interest of the ENS Protocol.

I’ve voted “Yes” to removing Brantly as a community steward.

I’ve voted “No” to removing Brantly as a community steward.

I voted in favor. As an elected Community Steward it is critical that I stand behind our community and protect those involved as well as the reputation of this protocol.

Personally, his views are diametrically opposed to mine and those that I love and care about. Despite this, my vote was not about my own personal beliefs or religious convictions.

My decision was made 100% in favor of what I think is best for ENS and our community. This vote was about his ability to function effectively in the role of Community Steward.

Yes absolutely thank you for doing this.

I would like to be considered for a Stewart should he be removed.

I am sure there is something in the bylaws about it if a member is voted out. Either a drop-in election is held as usual for a Steward like before including the nomination stage, or ENS Foundation can appoint one. I am not sure which is the case here. I am sure the current Stewards can tell you more @HealingVisions

If the steward that is removed was previously elected by vote, then the delegate with the next highest number of votes in that election will be inducted.

If the steward that is removed was previously selected by TNL, then TNL is allowed to choose a replacement.

In that case, it will be an appointment by TNL unless they delegate it over to the DAO (since brantly.eth is an appointed Steward). Makes sense. Thanks for clarifying!

Brantly.eth had an opportunity to redeem himself on Twitter’s public discourse last night. He instead chose to double down on his caustic rhetoric. I believe that this is an abuse of power as Community Steward and does not represent the views, beliefs and values of the ENS Community. It certainly is not representative of mine.

Should he stay in his position, it would jeopardize the Community’s mission for inclusivity and would tarnish the reputation of the organization as a whole. Without effective and immediate action, the ENS DAO will lose its credibility as a “Place for Civilized Discussion”.

My wish is for Brantly.eth to be immediately removed from his position as Community Steward. What the greater organization decides is not under my juris, but I expect that the remaining Stewards understand their responsibility to the Community.

After listening carefully to the concerns of the stewards, delegates, and many other community members, I believe it is in the best interest of ENS and the community to remove Brantly from his role as a Community Steward. As a friend and as a co-worker, Brantly has always been courteous, respectful and professional in every interaction I’ve had with him and seen of him with others. However, I firmly believe that web3 and the Ethereum community is a space for inclusivity, kindness and respect and I hope that we can all move forward together with these shared values.

At first I thought Brantly was sarcastically kidding (and it is a no-funny joke) then i noticed he is serious (and it is a terrible statement IMO), however it is still his own opinion right at stage and period of his life. tomorrow he will have a different one I can assure you. not necessarily something you like still -and it can be…-

and i found this is a great opportunity to enforce neutrality of ENS DAO and as a meritocratic system, people come and go and get judged by their own merit not ideological proclivities << which is situational and dynamically changing

5 Likes
[EP6.2] [Social] Election of a new Director of the ENS Foundation