Moving from ETH Mainnet to PoW

We would like to propose that the ENS fork and migrate back to the PoW chain. The merge has broken a lot of tools, and made it much more difficult to remain decentralized. Not so much because of the issues in PoS governance, but because it is extremely difficult now to deploy a full node of Ethereum technically. It is almost completely broken and barely held together.

Since the ENS is a DAO meant to serve every decentralized chain, we hereby float the idea of migration to a more suitable chain for the project. We strongly believe that the merge is not a success, and the problems with it are not addressed, nor will be addressed in the future.

Perhaps the ENS should become its own chain altogether!

Not going to happen.

After more frustration, we discovered the fine folks over at Lodestar are working hard to bring us unified nodes. However, their time reference is months, if not years. It is very weird nobody in the Ethereum community is talking about the difficulties, and centralization introduced by people like us going offline. Our node is still down because there are no adequate guides on what to do, and even if there were, it wouldn’t solve the bugs.

This does have a devastating near term impact on Ethereum development. A lot of what we have done now with ENS is broken, and we are probably just going to give up because it’s not been solved even with 3 devs, all doing smart contracts since 2016, have been trying to solve.

Using Infura or Alchemy is not an option. They don’t offer what we need, and that centralizes traffic.

As an individual, the merge makes my life too stressful. I’ve haven’t got anything done since the merge. Can’t say enough bad things from the technical side. I know many are wondering what the malaise is from in the ENS markets/registration, and no doubt this is a huge part.

The real takeaway from the merge is: Things were working, now they don’t.

Not just unable to fix for our needs, but totally broken, not running at all. Even if it did, it still wouldn’t be efficient. It’s a total unmitigated disaster.

Does ENS need Ethereum? It doesn’t. It can be migrated to any chain if the DAO wants.

All PoS solutions are all suboptimal strategies if you care about decentralization, but it’s not about that. It’s simply not working on the technical side. Ethereum has the ENS and that’s it. There’s not one single project other than ENS worth using Ethereum for these days. It has no advantages over competitors except network (i.e. TLV), but we saw how fast people could move to Solana and other EVM chains like Polygon.

The ENS should really be prepared to move chains, because as it stands now Ethereum will fail.

Are you aware of anyone else - outside your team - encountering the same problem that you have identified?
Not looking for names, more of a concensus view.

Might this be a case of general dissonance occuring within the Ethereum chain i.e. ‘we know it’s there, but if we don’t look at it directly, it might clear itself up before we have to address it’?

DEVCON had several tutorials about how to set up and run nodes on the PoS network.

I haven’t watched all, but here are some examples: 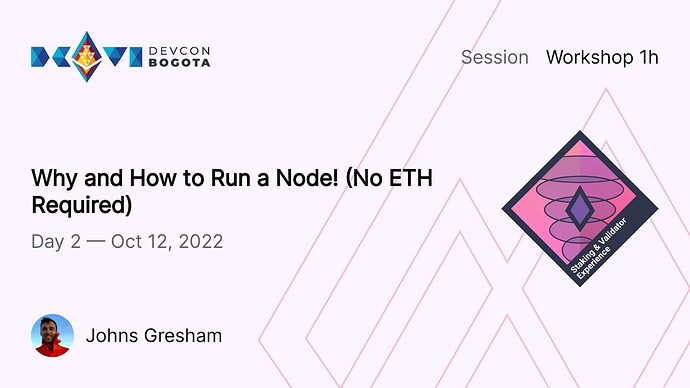 Why and How to Run a Node! (No ETH Required)

The foundation of Ethereum is a resilient and decentralized network of nodes. You’ll learn how nodes defend the network, the easiest ways to run a node, about the upcoming upgrades to Ethereum which make it easier to run a node, and more. 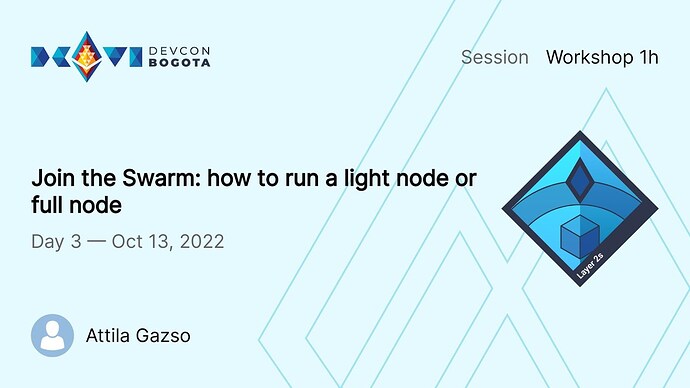 Join the Swarm: how to run a light node or full node

Swarm is a decentralised data storage and distribution technology. In this workshop you can learn how to use Swarm, including running light node or a full node. Also there will be a demo for node operators looking to profit from storage incentives... 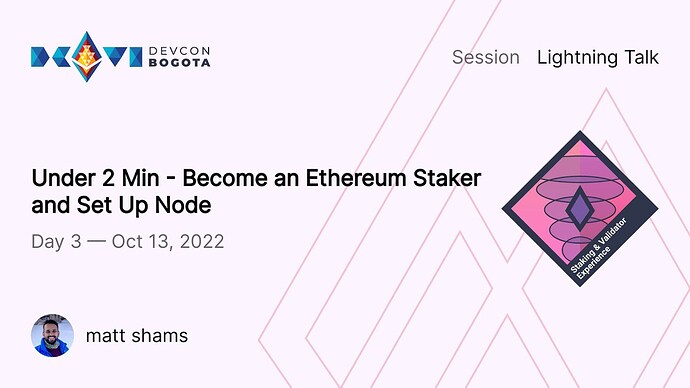 Under 2 Min - Become an Ethereum Staker and Set Up Node

We need more mainstream users to partake in Etheruem PoS activity, A brief talk showcasing stake tooling for Ethereum deposit contract that allows a normal user to safely stake 32 ETH and have his/her Ethereum Validator from 0, this includes...

Our main goal is to contribute to the network decentralization by making it easier and affordable for regular users to run nodes (and staking) on resource-constrained devices as well as helping to test the next major Ethereum upgrade (The Merge). In... 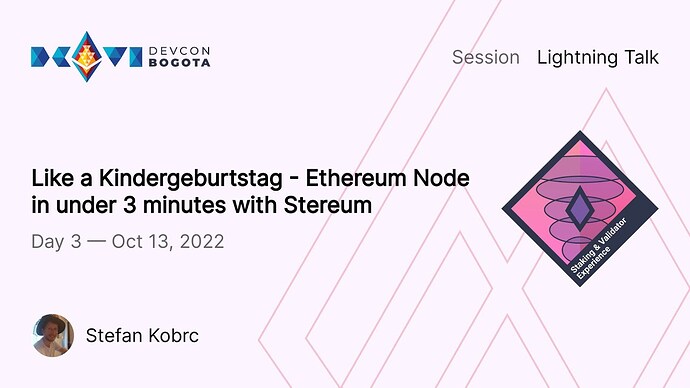 Like a Kindergeburtstag - Ethereum Node in under 3 minutes with Stereum

Stereum is a tool to manage the process of setting up & maintaining an Ethereum node for the user with a heavy focus on self sovereignty, privacy and flexibility. With Stereum you are capable of setting a node up in under 3 minutes. Around Bogota... 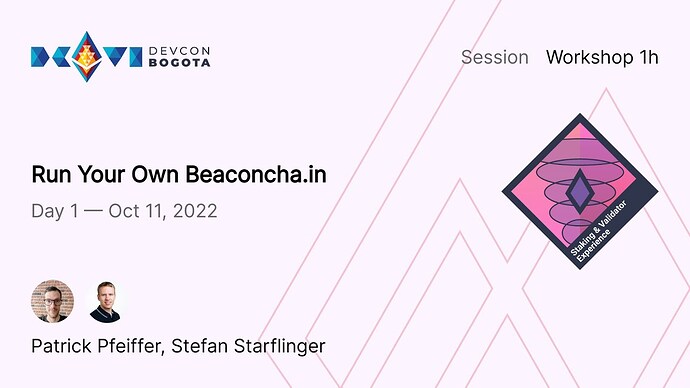 Run Your Own Beaconcha.in

In this workshop we will show participants how to setup and run the [beaconcha.in-explorer](https://beaconcha.in) for existing networks (mainnet, prater, sepolia) as well as for custom networks. Also we will explain how to analyze the network using...

Launch Your Own Validator Node 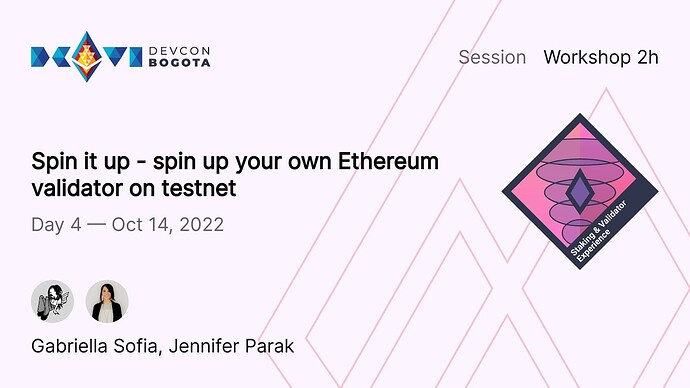 Spin it up - spin up your own Ethereum validator on testnet

This workshop aims to be an essential introduction to Ethereum PoS consensus by inspecting its underlying infrastructure. We will first demystify concepts such as Execution + Consensus layer, PoS validation, Keys and Signatures, and Slashing. You... 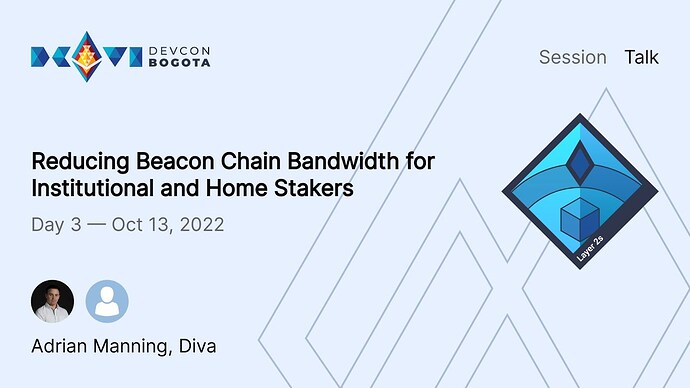 This talk gives an overview of the networking infrastructure of beacon nodes and details some of the recent research being done significantly reduce the growing bandwidth requirements of the Ethereum consensus layer. In particular, we will discuss... 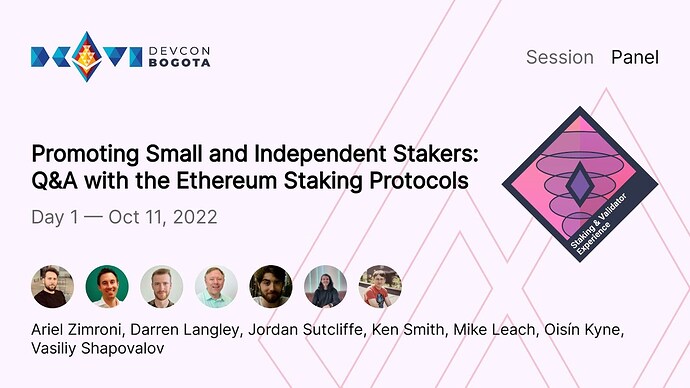 Promoting Small and Independent Stakers: Q&A with the Ethereum Staking...

Do any of those help?

I just happened to be passing, saw the thread and thought I would comment.

From what I know. ENS (ie fredbloggs.eth style names) was one of the few successes in the Ethereum system. It is a good idea and it seems fairly well supported here and in 3rd party dapps. Is this thread implying it has been broken since the merge and the only way to fix it is by pretending the merge never happened? I would have thought by now Ethereum PoW was dead and not really worth going back to. I could see that the concept would work on any blockchain (if it hasn’t been implemented already) and that is an option. Still, i would have thought trying to find a fix for it was a fairly important thing to do.

If you did ditch ethereum, what would that do to all the .eths out there?

The merge broke backends that now have to run two buggy clients from different repos at once. There’s no solution to a few of the bugs so far, and you need to expend considerable time to mitigate them.

Another solution would be to move ENS to Polygon. While Polygon has a quite terrible dev experience for gaming too, they have improved a lot of services, and the ENS really wouldn’t be affected by the shortcomings.

Our project (after about $300k in development) decided top cease operations on ENS fwiw, in part because of this issue. Maybe things will be ok, but we voiced a valid opinion and got laughed at basically. The nodes aren’t coming back for now. Hopefully there can be something simple and unified in the future, but for now it’s a mess.

@unblockreceipts.eth
These are all staking related, so if you are interested in the ponzinomics of PoS, you can get a validator to run quite easily. While it is appreciated always a consolidation of links to tutorials, none of these are useful, and it is clear you don’t understand the problem here fully. Nodes are used as a point of truth for the entire history of Ethereum, not just before the merge, and not just after it. Projects need their own point of truth, and a way to avoid centralized bottlenecks like Infura or Alchemy, which also have their own issues post merge.

Are you aware of anyone else - outside your team - encountering the same problem that you have identified?
Not looking for names, more of a concensus view.

Yes, everyone has the same problem. It depends on the queries and project though. You can work around some of them, mostly by using centralized nodes.

Even the core developers don’t understand how big of a risk a poorly implemented solution like TheGraph is when it comes to decentralized queries as well. We discovered a major bug affecting a heavily relied on query there, and nobody is the wiser so far except the devs.

The best solution for many things is to just have a full or archival node, something now not really possible without a ton of pain. You will not figure this out at all if you are just coming to Ethereum.

Might this be a case of general dissonance occuring within the Ethereum chain i.e. ‘we know it’s there, but if we don’t look at it directly, it might clear itself up before we have to address it’?

Pretty much the political mindset of the Ethereum user which believes in DAOs and governance as a opposed to code is always law. It’s not a good or a bad philosophy, it is one of many ideologies, but in this case it is far to easy to pass the buck. The devs of the Beacon clients are most certainly aware and working towards a fix, but a lot of this problem is just rushing something unsupported out. Microsoft did this to everyone many times during the 90s and naughties for example. People have been conditioned to things being unilaterally broken for the sake of progress.

The merge broke backends that now have to run two buggy clients from different repos at once. There’s no solution to a few of the bugs so far, and you need to expend considerable time to mitigate them.

I know you have a bee in your bonnet about this, but this is not most peoples’ experience. Running clients post-merge is not substantially harder than running them pre-merge, and thousands of people and organisations are doing so. I myself am running a dappnode, which was as simple as setting it up and pressing ‘go’.

ENS is not migrating off Ethereum for the forseeable future, much less to a moribund PoW fork.