Could someone ask Coinbase to chime in? Have they voted?

Script shells out empty result files though without errors

Did you setup the config?

Just checked. config.json is a template

We’re talking to the snapshot team about changing their calculation for runners-up so we get an accurate view of the 3 top candidates, but we may just have to drop back to downloading a dump of all the votes and calculating it ourselves. Either way we will make sure we have an accurate result from the election, even if it’s not showing in the snapshot interface.

This isn’t necessarily an objection. It’s more a perspective I will share. The fact that we can calculate final results by querying the snapshot and declare it good, presupposes that as being the only problem/issue we have.

The bigger issue is not being able to see accurate results while voting is still underway.

Here is what the public sees as current voting results for Stewards of the Public Goods Working Group: 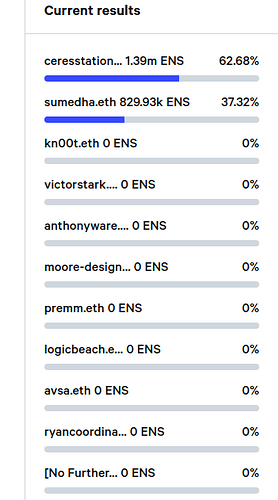 @taytems calculated the top 3 are:

Now, the results known the the public are skewed, yet pretty important for the public to know the standings in real-time, on the voting UI of snapshot. Why? There’s a lot of reasons, one is maybe voters wouldn’t want the same Steward in two categories. It’s not evident on snapshot that avsa.eth is in top 3 for two Working Groups (Public Goods & Ecosystem). As an example, maybe I really want to see avsa.eth become a Steward of a Working Group, but not of a second. (I am not saying he wouldn’t do a bang up job on both) Maybe instead I would like to diversify Stewards, and if I saw avsa.eth was definitely going to clinch Ecosystem, I would then change my vote to push up another Steward in Public Goods.

This is the real issue with how the voting has gone imho. I am not saying delay the nominations and start over. I just am not sure the public understood the voting method, and the bugs in snapshot have had some effects on who received votes.

Anyone else have thoughts on this?

I just am not sure the public understood the voting method, and the bugs in snapshot have had some effects on who received votes.

I agree that having an inaccurate tally could alter voter decision-making. If providing a real-time tally it should be accurate, otherwise, I’d prefer a blind election.

This likely wasn’t foreseeable, but the bugs in Snapshot should be worked out before the next major election. I can imagine some unrest if this were a tightly contested election.

The bigger issue is not being able to see accurate results while voting is still underway.

This is definitely a reasonable point and the script is just a temporary solution. I don’t have time right now to implement a solution for a PR, but I (or someone else if they’re willing) will be able to implement one in the future.

Assuming a PR for Meek STV gets accepted and merged by Snapshot, and if we choose to continue using this method at the next steward election, there will be an accurate result in the UI.

Just checked. config.json is a template

Set the config.json to the following:

This is a fair point - but unfortunately one we can’t do much about. I also would argue that ranked choice voting is a system in which strategic voting is much less beneficial, and thus less likely, so it should have less effect here.

Awesome! Thank you so much!

I like this. I’ve been a bit confused by the snapshot atm.

Good game and congrats to all involved!

Congratulations all! This is just the start.

, waiting to work with y’all

Congratulations to the elected stewards! We’ll be on your ass now

If some votes were not calculated manually, maybe the totals next to those names should not show (0.00 votes)?

That’s just a side effect of ranked choice voting, 0.00 votes means you were “eliminated” in the process.