This is a proposal to provide an automated endowment fund for ENS DAO’s current treasury and ongoing revenue. The goal is to ensure a stream of revenue for the DAO to support its core operations while minimizing custodial risk by limiting what actions a manager can do with Mimic.

Mimic is a platform that allows you to deploy tailored infrastructure to automate (and/or delegate) access to DeFi, in a secure and 100% non-custodial way. Mimic is especially suitable for treasury management, where you can simplify and speed up complex tasks while standing on top of every detail. This is achieved through our innovative Smart Vaults concept: an automated and trustless solution that can be customized to suit your operation needs.

Deploying a Smart Vault is simple. We only need to figure out the best management and investment strategy that better suits your needs and configure one for you. Moreover, Mimic provides you with lots of multi-layer flexibility, it can be easily scaled up by deploying and connecting additional Smart Vaults.

Our team members have a large experience in blockchain and especially in DeFi protocols. We have previously worked for many well-known projects like Aave, Balancer, Open Zeppelin, Aragon, POAP and The Graph.

We propose to create an automated endowment fund where operations can be predefined and customized to limit how they can be executed in a trustless way. This will be achieved by deploying customized Smart Vaults for ENS DAO.

Our proposal is to configure a few DeFi investment strategies for the ENS Smart Vaults along with a set of automated actions to make sure we can provide a secure and smooth experience. The ENS Smart Vaults will be fully owned by ENS DAO, funds will never be controlled by anyone else and these can be withdrawn by the ENS DAO at any point in time.

Actions will only be allowed to invest any deposited assets in the list of strategies that were authorized by the ENS DAO beforehand. Additionally, these actions will be in charge of re-investing yield revenue periodically. On the other hand, in order to pay expenses, an automated action will be set up to withdraw a portion of that revenue to the ENS DAO. Note that all this behavior will be enforced by smart contracts code, actions won’t be allowed to perform any further logic.

We understand that the goal of the DAO is not to make a 5x on its treasury, but to earn enough revenue to pay operational costs. This is why we suggest tackling this issue in a progressive and secure way, with incremental deposits and enabling low-risk strategies for the ENS Smart Vaults, while having the chance to include others in the future in case it is desired.

Here is the list of low-risk investment strategies we think the ENS DAO should start with:

These rates are computed considering:

To continue a progressive way of working, we suggest a vesting approach where current treasury income is transferred to Smart Vaults in a series of stages while future income will be collected automatically.

Considering current market conditions and income stream from earned and unearned revenue, ENS DAO will reach ~4M USDC for annual operating expenses in less than 2.5 years depending on how much of the treasury is allocated.

Up to this day, Mimic already has strategies implemented for many popular DeFi protocols such as Uniswap, Balancer, Aave, Compound, and Curve. However, as mentioned above, we suggest starting with a more conservative approach but remaining flexible to invest in higher-risk strategies in the future if desired.

Mimic will deploy two Smart Vaults, one for earned income and another one for unearned income. Both Smart Vaults will be owned by the DAO and contain a series of predefined actions to manage the assets automatically or manually.

Here is a proposed list of actions for the earned income Smart Vault: 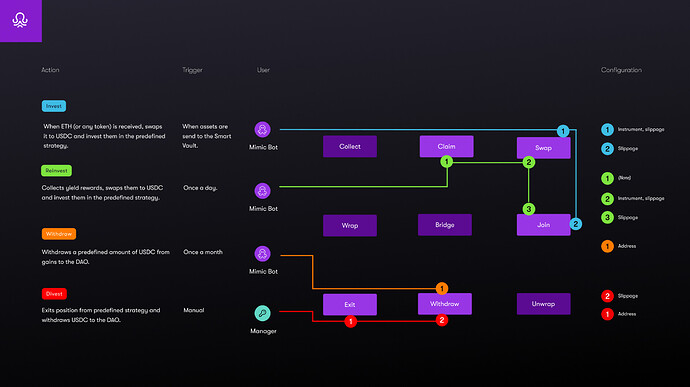 This architecture assumes that assets are sent by the ENS DAO to the Smart Vault to start managing them automatically. However, Smart Vaults can be configured to collect assets from a wallet or smart contract if needed.

Similar actions will be configured for the Smart Vault for unearned income, with the difference that it will handle and allocates ETH instead of USDC.

For example, if a new strategy is added to the Smart Vault for unearned income to diversify 50% of its allocation to it, then an action to move assets between them can be easily created and automated.

Mimic offers a reporting site where users can follow all their Smart Vaults activity. Mimic also supports subscribing to a notifications service that can be easily integrated with some chat rooms like Discord. Additionally, users can subscribe to be notified with periodic reports that will be emitted by Mimic automatically. These reports include details such as yield revenue, charged fees, treasury diversification, and transaction activity, among others.

Mimic will be in charge of monitoring the ENS Smart Vaults on a daily basis, making sure the reporting tools are kept up-to-date accordingly. Additionally, Mimic will make use of its own bots infrastructure to execute the automated actions when needed.

Mimic will charge a 4% performance fee based on the yield revenue coming out of the investment strategies set up for the ENS Smart Vault.

As mentioned before ENS DAO will be in full control of its Smart Vault and the funds that were deposited into it. This means ENS DAO is allowed to exit at any point in time. Neither Mimic nor anyone else, unless it was previously allowed by the ENS DAO, will be never in control of those funds.

Once the final details of the ENS Smart Vaults are finalized, the Mimic team will take full responsibility to set up the required automated actions and investment strategies. Mimic already counts with infrastructure to deploy and test Smart Vaults that can be applied for this use case.

Assuming the proposed investment strategies and automated actions are accepted by ENS DAO, setting a Smart Vault for it shouldn’t take longer than a month. After that, we will schedule an audit process for the configuration before the deployment which shouldn’t take more than two weeks.

Thank you for providing this detailed proposal.

I would like to ask a few questions pertaining to your proposal and organization as Mimic seems to have recently established itself.

Does this mean the Mimic Team (as a whole) has provided these well known projects with the same Smart Vault Tech that you are proposing to ENS DAO or are the Individuals who are now part of the Mimic Team helped develop smaller projects within those organizations with no direct affiliation with Mimic ?

Can you provide a spreadsheet(s) or some other data with the outcomes of the previous projects you have worked on that show that your strategy was a success, particularly P/Ls, initial deposit amounts, yields for each strategy, etc.

Do the team members of Mimic have any prior first hand experience with strategic response, time critical risk-based analysis, decision and execution after receiving a vulnerability report that is critical?

Does mimic have a set of procedures to follow in the event that assets are discovered to be vulnerable or is that something Mimic would be outsourcing to a third party like Immunefi?

I didn’t see any emergency / exit all positions mechanisms, is that something that can be incorporated?

How would you triage a critical report or report of intent?

Who is auditing your contracts?

Hi @accessor.eth, thanks for taking the time to read the proposal and asking some questions to clear any doubts.

Does this mean the Mimic Team (as a whole) has provided these well-known projects with the same Smart Vault Tech that you are proposing to ENS DAO or are the Individuals who are now part of the Mimic Team helped develop smaller projects within those organizations with no direct affiliation with Mimic ?

Just to be clear, the team members of Mimic have worked individually and in some occasions together for Aave, Balancer, Open Zeppelin, Aragon, POAP, and The Graph. Additionally, due to our experience and based on our relation to these projects, we are already having conversations to deploy Smart Vaults for some of them, similar to the ones we proposed to ENS. Moreover, we are working with other projects like dxDAO, Paraswap, and Decentraland.

Can you provide a spreadsheet(s) or some other data with the outcomes of the previous projects you have worked on that show that your strategy was a success, particularly P/Ls, initial deposit amounts, yields for each strategy, etc.

Smart Vaults is a new technology we’ve recently launched to make your DeFi experience much easier. Therefore, we don’t have historic information to show about them yet. However, the strategies we are proposing here work in the same way to the ones we implemented before for the previous version of Mimic, you can take a look at their yield information here.

On the other hand, some of the projects we heavily helped building like Aave and Balancer speak for themselves.

Do the team members of Mimic have any prior first hand experience with strategic response, time critical risk-based analysis, decision and execution after receiving a vulnerability report that is critical?

Yes, we have internal processes to monitor and procedures to take action in case a vulnerability is found. We also have experience facing similar situations in the projects we worked for that we listed above.

Does mimic have a set of procedures to follow in the event that assets are discovered to be vulnerable or is that something Mimic would be outsourcing to a third party like Immunefi?

Sure, we are planning to open a bug bounty program at Immunefi once we finish our Smart Vault audit.

I didn’t see any emergency / exit all positions mechanisms, is that something that can be incorporated?

Yes, we can configure one emergency action per position and a global emergency action to exit all positions at once. We recommend allowing not only the DAO but a trusted committee to trigger these actions while enforcing the assets to be sent back to the DAO

Also, remember that the DAO has full ownership and control of the Smart Vault’s assets and can decide to withdraw them at any time.

How would you triage a critical report or report of intent?

In case we receive a critical report, we will act immediately in order to assess its severity and act accordingly. In case Smart Vaults assets are at risk, we will get in touch with the trusted committee either to pause the Smart Vaults operations or exit its positions until it can be migrated to a new implementation with the corresponding fixes.

Who is auditing your contracts?

Initially, our smart contracts have been privately audited by former Open Zeppelin auditors months ago. We are currently finishing an audit process with Verilog , and we are already about to start a new audit process with Certora.

I hope we answered all your questions. Let us know if we need to expand more.

We noticed that it may not be fully clear from where we got our 2.5 years projection to reach a 4M USDC for annual operating expenses. It was obtained based on a 5.5% projected return from the strategies that we mentioned for unearned/earned income, a target size of 75M and an initial size of 20M.