General questions:
Would be good to know who is managing the shop and income - does it go to TLD? using a credit card processor? Does this become an income stream for the DAO? Not saying all the above should be answered right away, but something I would like clarity on.

I assume payment for tshirts and items would be in fiat, a consideration would be to add the option for crypto-payments through BTCPayServer has a Shopify integration… this is a self-hosted open-source PoS system to accept crypto for goods:

Inclusion of an option to pay more for the item to have it printed on sustainable and fairtrade cotton / ethical sourcing.

It may be possible to allow people to select fair trade cotton. It depends on the blanks that the fulfillment partner used by Printful has in stock. The most common shirt blanks are usually Gildan, Bella & Canvas, or Next Level in North America. American Apparel might have fair trade cotton, but I’m not sure if it will be in stock at all fulfillment centers… They’re also owned by Gildan now anyways. Personally, I would favor paying more for a high-quality fair trade cotton shirt.

CC licensing some designs (maybe not the logo) so that anyone from the community can take a get printed on tshirts, mugs, etc locally to where they are.

On preview.ens.domains, there is a section for a media kit. All of the assets should be available in the future for any print shop to use. In the meantime, maybe we can access the repo with the official files. There are a few different gradients and wordmarks being used. I’m curious to know what the official branding guide recommends.

Would be good to know who is managing the shop and income - does it go to TLD? using a credit card processor? Does this become an income stream for the DAO? Not saying all the above should be answered right away, but something I would like clarity on.

I assume it would go back to the ENS DAO Treasury, not TNL. The only caveat to this is that we will want a trusted custodian of the accounts since it may reveal sensitive user information. The custodian may end up being a TNL employee.

As far as payment and revenue, it makes sense to roll this into the treasury or other marketing-related funding pools, but the subgroup handling this probably should decide. I’d love to see a crypto-payment integration if we have someone skilled who can work that into Shopify.

Thanks for the reply Coltron. I didn’t see the Media Kit section in preview.ens.domains (at the moment doens’t link to any content) and am also curious if there is a brand book or other brand specifications that are already noted. 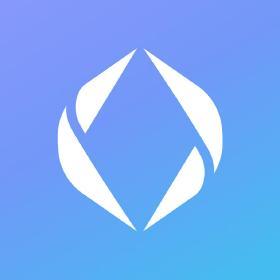 Something to consider for a working group to tackle?

Agreed that it is best to get the Shopify / merchant system working before seeking to integrate crypto-native payments. Once the service is up I can see about integrating BTCPayServer or some other service to allow users to pay in crypto directly.

Had a lightbulb moment - why should we need to run Wordpress + Shopify when we can go FOSS and have the ‘shop’ be managed by OpenCart?

Last time I tried OpenCart was in 2015, seems things moved forward and might be an alternative to the Wordpress + Shopify stack

OpenCart is an online store management system. It is PHP-based, using a MySQL database and HTML components. Support is provided for different languages and currencies. It is freely available under the GNU General Public License. As of May 2016, 342,000 websites were using OpenCart. OpenCart was originally developed in 1998 by Christopher G. Mann for Walnut Creek CDROM and later The FreeBSD Mall. The first public release was on May 11, 1999. Developed in Perl, the project saw little activity, an...

I’m glad to see that there has been some engagement with this topic. I kinda posted it and have not checked this much. It’s kinda difficult to be productive on a forum and for projects when lacking WiFi

Does anyone know who owns the ENS ‘usernames.eth’?

Also @Coltron.eth could you elaborate on what you mean by password or codeword items?

I really like the customization idea. @nick.eth you say it makes no difference to Printful to do customizations… I take your word for it—I would like to note though, there are A LOT of ENS users and I know you are aware of that. The custom thing might make things a little chaotic.

~600k ENS names and I think last time I checked about half that number in holders. Hypothetically 10% of people are interested in purchasing and then 5% of that interested in a custom Idea is still ~1500 different custom orders. And those are just numbers being thrown out. nothing at all serious.

I think that a base design for each garment needs to be decided on. Then we can run a promotional or something as a “public temp check” per se for a week to give us an idea on the demand. Maybe choose a limited number…or even a limited edition release. Have a snapshot on active members in the Governance that will automatically be counted for.

In continuing thought; shirts, garments or other novelties are also free advertising. I think it is pertinent that we capitalize that opportunity with putting as much information on the garment/item without it being too much. Just ‘ENS’ is not enough in my opinion–That doesn’t really tell anyone much–if they don’t know. Most people might just think it’s another brand. (absolutely nothing against ENS as whole, just trying to think critically for growth and adoption of more ENS Domain holders/users) @inplco has a fun design and I think I will branch off that if you don’t mind.

@NicLaz.eth – I like your idea about the payment. I’m not going to avoid this – but the irony of using BTC to pay for Ethereum items is quite humorous.

@Coltron.eth would it be possible that I could acquire samples from vendors? Also, hypothetically if I were to take on that role ( or anyone else for any future business relations). Would ENS/TNL want/require/or shall etc… have us use an official ENS asset for communicating? I feel like it would be strange or suspicious if I was working at a fairly large company and I received an email from user@gmail.com that reads " I’m reaching out on behalf of … etc etc."

Also @coltron, I reached out to whomever is on the other side of preview.ens.domains requesting the same thing a couple weeks ago. I expect that they should have a style-guide/branding guidelines for official use. If anyone is attached to that please do post/pin that resource somewhere very accessible to most, that is very important to keep a consistent recognizable image.

@NicLaz.eth I’m going to comb through libhunt and maybe rust and python repos to see what can of cool projects I can locate. Although I think it would be best if we ran a native platform using React and web3.js. Is there a need for shopify? Maybe we, us or I or if anyone is connected with toby.eth–is it? who is shopify CEO. Wonder what kind of stuff he has up his sleeve. Maybe he has a project he would like to showcase.—who knows.

“any response if for opinion purpose only unless…”

I also just realized ( unless I looked over ) just Ethereum itself has no official shop…Lets do it ? Who would be the best POC for asset permissioning? @nick.eth

Yes, feel free to adapt the design of course

It used to have one, but Virgil was the one who ran it. It used Printful for fulfillment.

Also @Coltron.eth could you elaborate on what you mean by password or codeword items?

An interesting feature to incorporate would be a password protected section or one-time use codes E.g. If Nick or another team member wanted to order a shirt through the system with their name on it.

In theory this would be relatively easy to implement with a pre-designed shirt that was only purchasable with a special code or in a team-only section of the store.

@Coltron.eth would it be possible that I could acquire samples from vendors?

My gut reaction is no… Not if we use Printify or Printful’s fulfillment. You could always find one locally or through Amazon and check it out. For example, if we set up the store to use a Bella & Canvas Style 3001C blank, you’d just need to find one locally to get an idea for the fit/feel.

Would ENS/TNL want/require/or shall etc… have us use an official ENS asset for communicating?

I don’t think this would be necessary.

@NicLaz.eth – I like your idea about the payment. I’m not going to avoid this – but the irony of using BTC to pay for Ethereum items is quite humorous.

I personally see it as a good thing for the DAO Treasury if we do start hodling a more diversified set of assets. Please note that BTCPayServer is not BTC-only:

BIAS: I have been involved with the project in the early days, and love the open-source nature of the PoS system and invoice creation. That said, only sharing this here for your consideration, Shopify + plugins can work just as well.

Is there a need for shopify? Maybe we, us or I or if anyone is connected with toby.eth–is it? who is shopify CEO. Wonder what kind of stuff he has up his sleeve. Maybe he has a project he would like to showcase.—who knows.

ah… did not know this!

I found this shirt design thread and wanted to participate! I am a designer and often make shirts myself so I can offer some insights.

I usually create limited edition garments, so I don’t have experience with drop ship. However, I can advise on shirt quality. I use ‘Gildan Heavy Cotton’ and it is a great quality while not being too expensive. Also WooCommerce is a good free alternative to Shopify and can implement cryptopayments using Coinbase Commerce, here is an example.

I created two prototype shirt designs attached as renderings. I think the ENS logo is very elegant and its beauty should be maintained in these garments. Not sure if its possible to have a gradient shirt, but that could be a really unique look!

Would love feedback and I’m happy to help on this as needed. 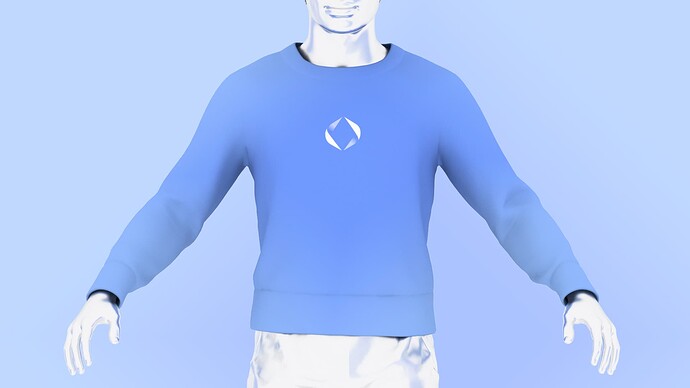 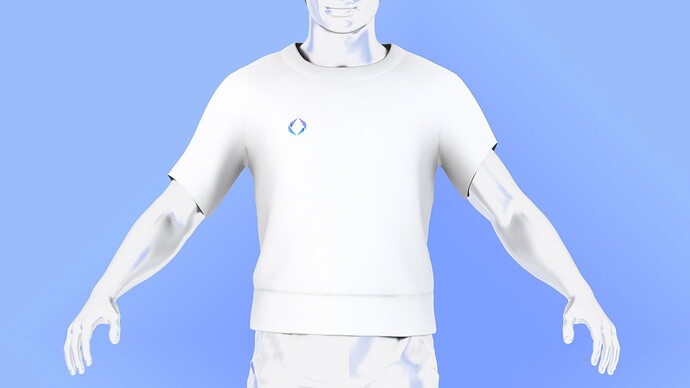 a quick note to let everyone know I’m moving this thread to the Community Working Group > General Discussion category.

inhave some designs coming up soon

imo gildan is not a favorable material. that’s usually like sports team shirt and rough.

I didn’t see the Media Kit section in preview.ens.domains (at the moment doens’t link to any content) and am also curious if there is a brand book or other brand specifications that are already noted.

There’s now a media kit available here.
I believe over time there will be a larger amount of design guidelines/specs for public use, but for the moment the media kit is all that is available. 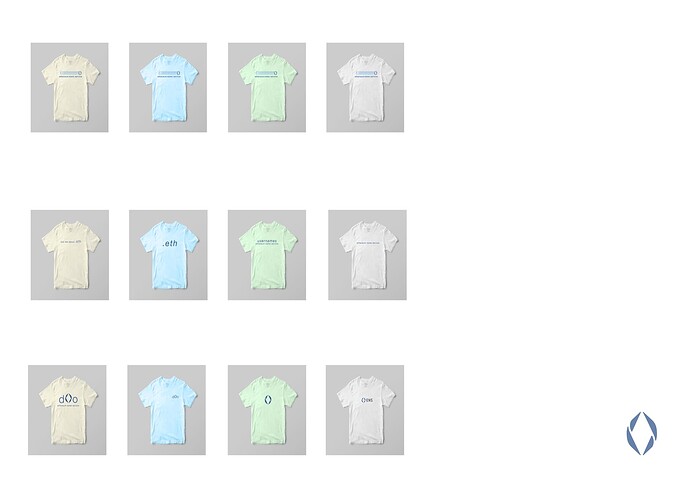 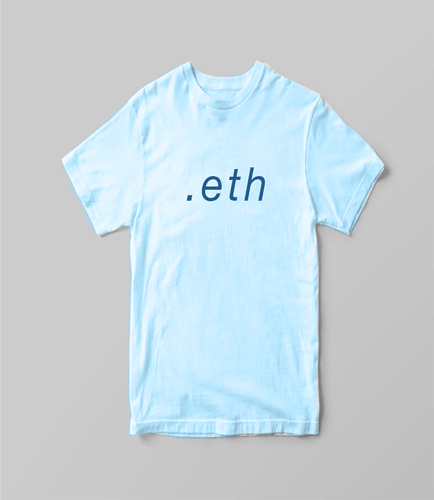 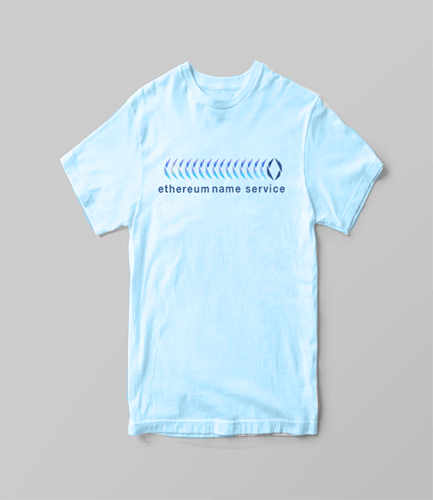 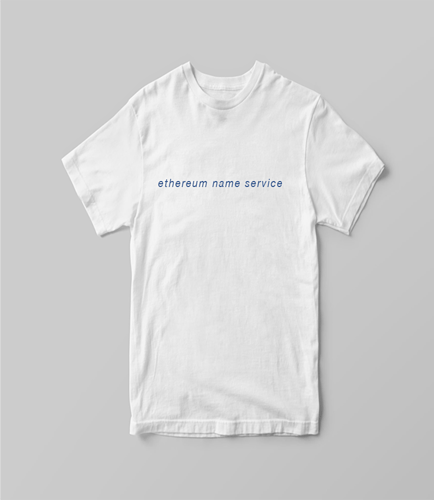 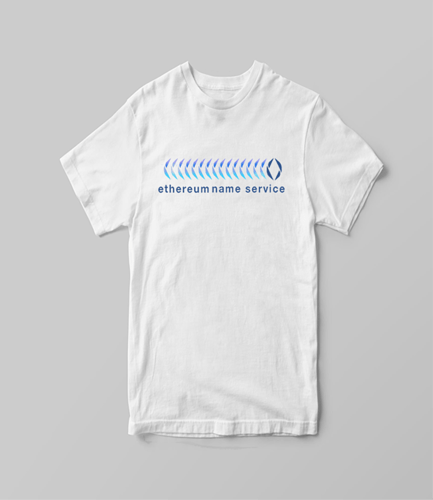 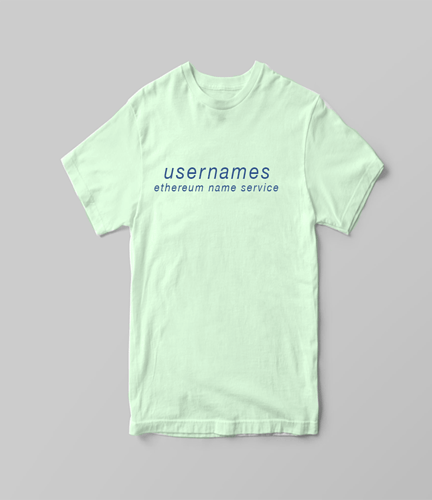