Is the ENS DAO willing to have a conversation about this? I hope so. This deserves to blow up.

Probably my last post here but willing to take the risk

Or at least if brantly.eth can restate his position of being homophobic, cultist, anti-scientific, sexist among other things, it might help a lot of people pack their shit up, because there is no way I am participating in a DAO with this Director of Operations

As for me, I don’t agree with the statements above.

We need to have a conversation, and then action. Unacceptable to affiliated publicly with this.

“I am catholic. So what. Read my bio. I can shit on anyone”

I’m an Atheist, a Humanist, and politically liberal. My views are about as opposite Brantly’s as you could imagine, on just about any issue you’d care to name. I don’t expect anyone at TNL to share my views, but I do expect them to treat others with equality and respect, regardless of their gender, cis/trans status, sexual orientation, or religion (or lack thereof).

I’ve been working with Brantly for a number of years now, and I’ve never seen Brantly treat anyone as different or lesser because of who they are.

I am sure TNL as a group has the caliber to understand that subsurface, non-trivial and invisible discrimination takes decades to become apparent, as the rights of minorities have been trampled on for decades until today not due to discriminators marching on the streets but discriminators abusing their position of power invisibly. The position of DOO is of public, social and ethical credibility, which Brantly lacks by all evidence at hand, especially after his abysmal defence of his stance on Twitter spaces. He doesn’t drip of empathy or conscience let alone ooze of responsibility, which we think ENS DAO is all about.

Post-edit: @brantlymillegan Inclusivity doesn’t mean opening yourself up to the bullshit of each other and tolerating it. It means to be able to respect each other while keeping our bullshit to ourselves. It’s a big part in intellectual development of an individual. But the minimum requirement for that is to be able to recognise bullshit in the first place and admit that you are wrong, and hearing you speak today was a testament that you cannot recognise bullshit because for you it is normal. That sets you at odds with a vast majority of the people who can identify bullshit, and then there are those who can even keep it to themselves. If you want to come with statistics about catholicism and your perceived bullshit being the predominant thesis, I have news for you. DM me.

Director of Operations posting a braindead outdated take on public media, was he just hired or born yesterday? Does TNL not provide media management?

If the Direct of Operations makes a judgement call to double down on his views on a livestream and refuse to condemn acts like child rape, what does that say about TNL?

I’ve never seen Brantly treat anyone as different or lesser because of who they are.

Nick, given what we’ve seen and heard tonight, I don’t understand the logic of this statement. 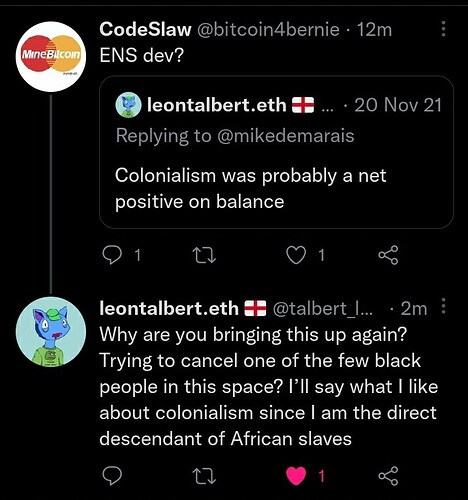 This is what I came here to highlight. Did anyone from True Names tell Brantly to get off the Spaces? The entire True Name team looks incompetent tonight.

Getting on a Space to share your personal views took from all of who are part of the DAO. Brantly you took the attention and respect given to you be ENS and used it to your own ego. I don’t care what your personal battle is here. Go do it on your own without dragging ENS into it.

And worse, the True Names team stood by and allowed it to happen. Nick, Alisha, we expected better.

While I agree with you, I don’t know how they could have practically stopped him even if they wanted to. Everyone works remotely. Web3 native issue. Can’t tape their mouth shut.

It’s not just Brantly, there’s a lot of trash behind the ENS team. 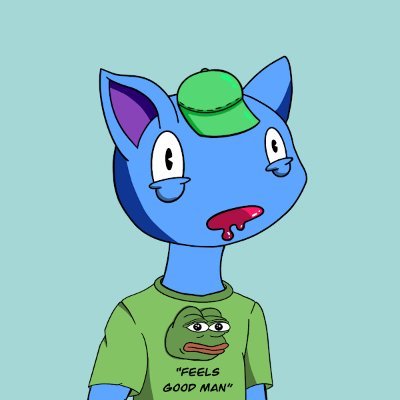 @talbert_leon
@mikedemarais Colonialism was probably a net positive on balance

I don’t know how it works as a company or how it’s structured. I doubt a DAO would even be compelling legal basis to remove them.

I asked them in the other thread here: Clarify DAO's democratic power to remove members of the core team

The future accessibility and inclusivity of web3 cannot be decided, even partially, by people that stand on the opposite spectrum of things like inclusivity. Or women/human rights, judging by the things mentioned in his post…
It’s a very damaging and hateful day-to-day experience for a lot of people living in this world.
The digital world - which is often a place to escape from the hateful reality for all kinds of people all across the globe - making this space inclusive is what should be on everyones mind.

Projects like this should actually be making waves with accessibility, being borderless and inclusive - instead we have brantly.eth and his ‘opinions’.
You can’t even look at anything ENS related without there being ‘brantly’ plastered all over it - i think ensdomains needs to re-think their representatives and their publicly shared values - as they are clashing with the project and it’s values & what web3 should be standing for.

This gaffe was likely a long time in the making. A core team member doesn’t just stand up and grab the mic one day and demand the spotlight for personal use. It builds over time. ENS needed a real communications manager months ago, not someone just winging it. Policies for how to engage media and brands.

But in terms of answering your question on what to do – illustrated to demonstrate they weren’t powerless, rather than trying to change the past:

When you say that homosexual acts are “evil,” you are implicitly saying that the people committing those acts are evil too, because what kind of person commits evil acts day after day other than an evil one? So, people think you believe that they are evil because they express love to their partner in life. The idea that one could be evil for consensually expressing love is deeply hurtful, in a way that you may never be able to truly understand. It is also a problem because labeling someone as evil – dehumanizing people like that – opens the door to “righteous” violence in some deranged people’s minds, so you have to be careful about calling someone or something evil, especially when it is directed at a community that has a history of violence committed against them, and especially when you are in a position of public power/authority.

Now, I believe Brantly has said that he doesn’t believe that people that commit these “evil” acts are evil themselves. That is not how people interpreted the tweets, and I think some clarification on that would have gone a long way. Just a quick “Hey, I do not believe those in the LGBTQ+ community are evil, and I believe you should be treated with love and respect” could have alleviated a majority of the pressure. Instead though, it was doubling down on what was already said multiple times which had the opposite effect.

Brantly’s position as the public leader of the ENS community is inherently one of trust and goodwill, and both categories took a pretty large hit tonight. Action may have to be taken to protect the interests of the ENS protocol and DAO, but I will let other more prominent members chime in on that note. I really just wanted to get my thoughts out in a medium that Brantly has a good chance of seeing.

To close, I just want to say that people generally just want to live their lives and be respected as human beings; not told their love or identity is invalid and/or evil. And honestly, it really isn’t that hard to make the effort to express that you respect others without agreeing with them or their life choices. Whatever happens with this situation and ENS DAO, I hope that Brantly recognizes this and makes an attempt at expressing his own respect for others as human beings.

Web3 will be built with humane mindsets.

I will vote with what little i have for what I feel is right. I’ll respect the outcome either way.

At the very least he needs to take anything ENS related out of his twitter bio. fucking clown

Let’s not bring toxic cancel culture to Web3. Brantly I love you regardless of your crazy views. Let’s all work together, maybe we can convince him to change some views over time. We don’t know his personal history, we don’t know his upbringing. Cancelling anyone you disagree with just means we all continue living in bubbles. As far as I can see he is not hating anyone, he just thinks some acts are immoral.