On Property rights and threat models for ENS

This is likely to be deemed to be an ultra vires act, as you can’t tie the hands of a future body to act that possess the same powers, pursuant to the Constitution.

Thanks @AvsA for this concise summary. It was really necessary since a lot of misinformation floating around is about “ENS will take your names based on your views”.

I have started a repo for threat analysis to DAO structures, starting with ENS. It’s in Python. I’ll update where there are any mentionable findings. 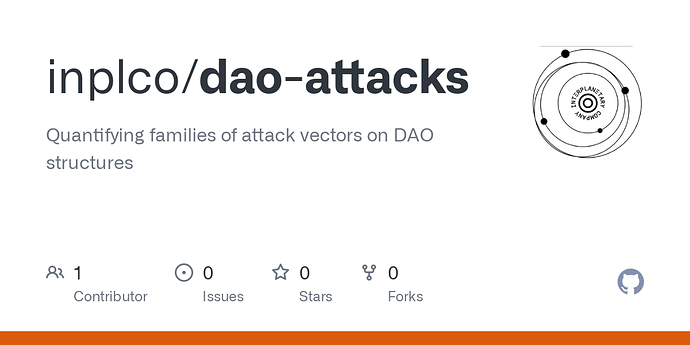 The full set of results can be found here. To summarise:

These results suggest that a vote can be triggered by as few as 4 not-necessarily-top delegates. In comparison, in a utopic world where all 50 delegates have equal votes, quorum cannot be reached unless a minimum of 9 delegates collude.

In further detail, in each case I looked for reoccurrence of delegates across all combinations of attacks and gave them a threat score (see below) 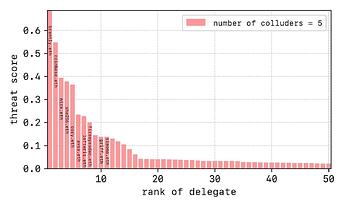 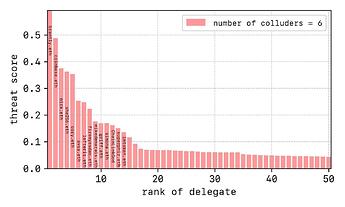 All three cases put together show the expected trend (see below). Notably, when N > 25, ‘colluders’ effectively become ‘agreers’ since now the majority decides the fate of the protocol.

Thanks @AvsA for starting this thread!

Nick, can you help to clarify this?

I think that .eth cannot even be changed by the root, that’s what @James and @nick.eth said in this thread: [EP1] [Social] Proposal: Transfer ENS Treasury and Contract Ownership

It’s more because the .eth TLD is “locked” - it can’t be changed by anyone any longer - while the same is not true for the other TLDs. They’re not; presently only .eth 2LDs are 721 NFTs. We’re working on a name wrapper contract that would let you wrap any name at any level into an 1155 NFT, though. That’s really up to the DAO and the keyholders. Personally I’d like to see the DAO demonstrate a track record of sensible governance before asking the keyholders to hand over the most easily abus…

I think that .eth cannot even be changed by the root

I get that. But, this being Ethereum, we can never be sure that something that was changed after the smart contract was deployed is irreversible unless we can look at it on-chain and understand that it’s forever immutable. I am just trying to understand how the “lock” was implemented and get totally confident that it can’t be reversed by the multisig.

This is a fantastic comment! Considering that the delegate power will always be a power law, what do you think is a good quorum to raise the bar?

The lock cannot be overriden. It exists to deny even the owner the ability to change a record.

Well played: the extent of a corporation’s competence to enter into contracts depends on the scope of the power its charter grants.

More than that: Canonical definition of ultra vires directly decides on the scope of limiting power by eliminating all acts that violate causality principles, for example, new laws cannot be enforced on non-existent entities (in the future). Beyond the trivial ultra vires, the charter can of course set their own ultra vires.

The quorum question isn’t easy to answer if you are looking for one consistent value. if you are willing to adopt a dynamic value, then it is easier. The reason: the delegate vote distribution (as well as threat score) will always be a power law (Rankγ) like you said, but it could be of different index γ which decides the slope. In utopia, γ = 0. In real life, you’d still want this value to be as low as possible and the power law to be as flat as possible. Flatter power law will require more number of colluders to attack and therefore decrease the likelihood. Having said that, the delegate vote count is not fixed, so the power laws are always shifting. Currently, threat to ENS starts at 4 colluders and Brantly, Coinbase, Nick feature in roughly 80%, 65%, 40% of these hypothetical attacks respectively as a reference. What number do you think is safe? It is a dynamic question (γ is varying) and should be treated as such. Beyond that, even if you flatten the power law, there will still be a finite number of colluders who could attack the protocol.

However, it doesn’t hurt to run a simulation with a higher quorum and with the current delegate vote distribution, a quorum of 2,000,000 will require a minimum of 7-8 colluders. This is obviously far better than 4 colluders but not very safe in a general context. Other list of values below:

Having looked at these values, quorum should be raised to 2,000,000 in my opinion. The “attacks” are only attacks on quorum so relatively safe and don’t need a hyper-strict criteria. I will run more simulations for a full on-chain voting. If I find something meaningful, I’ll go ahead and attack the protocol. You know where to find me.

Avsa is putting something together; for now, you can see them as subdomains of ens.eth: ENS App

I’ll be continuing the threat analysis in greater detail on this dedicated domain: ens.inplco.eth which essentially links to this mirror: ENS - Interplanetary Forum. I’ll keep updating here with meaningful findings but not in full detail

Minor update on the threat analysis: 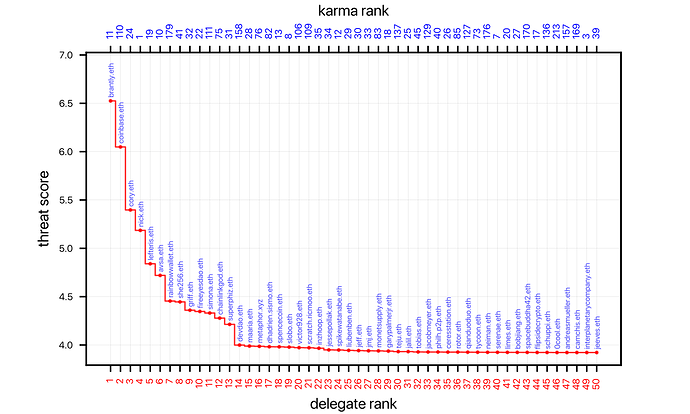 Minor update on the threat analysis:

Do we know how this distribution compares to other somewhat similar DAOs? Are we in the middle of the bell curve on this, or are we a deviation?