Is there a way to make a public proposal to twitter that in order to use a username ending in .eth, the user must own the domain?

It seems to me that this would:

I’m doubtful that Twitter would actually listen if it involved them having to write a code to do that, heck even if the code was written for them!
However it’s not totally impossible that some kind of process like the verified checkmark could be implemented. It might require a lot of formal corporate negotiation, but it wouldn’t be totally impossible.
Eventually more than just twitter will have to optimize for the utility of .eth names anyway, right?

It does not make any difference what we expect Twitter to do or not. As an influential DAO, if we think this is something we would favour, we should make our well-documented and detailed proposal to them.

It may or may not be implemented, fully, partially, who knows. But the ENS DAO providing a design on how it should be done is important. It sets the bar, and advances the discussion.

hmm very true!
It’s likely that I’m just a hesitant and overcautious person.
The proposal process and this DAO in particular is very professional and should be able to have enough influence, so why not give it a shot!
I do think that not only is this a great idea, but it’ll be an eventual necessity.

Eventually, it’d be nice for this to happen. I think hashtag crypto users can benefit from the .eth username and the checkmark greatly! It’s a sign of commitment.

This is also about protecting our .eth brand, in the sense that it has to be something people trust.

Protecting the .eth brand and minimising misuse, is not just about technical decisions but also about proactively reaching out to places where it’s often used, and propose the right way to use it. Twitter is such a case where .eth is (relatively) widely used, and it may also be used in a malicious way.

A well-thought and well documented proposal can also serve as a guideline for other services who would like to implement something similar.

Given the current traction of ENS (450k+ domains), convincing Twitter to prioritize this would be a huge uphill battle. I’d wait until:

It’s about opening the conversation. Having a few (maybe/probably more in the future) thousand twitter users know that this is a thing they should expect from Twitter. About getting a few hundred articles on it, a few thousand retweets. And probably getting a response from Twitter (that they think about it, they don’t like it, they would need some piece of infrastructure from us in order to implement it, etc.).

We already know that Twitter is working on some kind of NFT integration (official sources). Why not open this now, instead of waiting for a year or two? Twitter is a big company, even if they liked it, and they wanted to implement it, it would take many months before it was done. Why not put it in their radar now?

I support this proposal – it goes hand in hand with NFT pfp verification that we know they’re working on.

In my mind, it’s not about convincing Twitter. It’s about opening the conversation. Having a few (maybe/probably more in the future) thousand twitter users know that this is a thing they should expect from Twitter. About getting a few hundred articles on it, a few thousand retweets. And probably getting a response from Twitter (that they think about it, they don’t like it, they would need some piece of infrastructure from us in order to implement it, etc.). We already know that Twitter is work…

I agree with moving this forward. I believe that it would be beneficial for all and does no harm to anyone. Waiting to open up a discussion about this with Twitter is NOT a good idea in my opinion. This would be a great initiative for the ENS DAO to take. It would be a nice step in pushing the adoption of web3 protocols.

This is what we call a win-win-win.

I am full in too, anything we can do to make it a little harder on scammers is a good thing to do.

I worked on a big portion of the backend for the NFT pfp verification project that is soon going to launch. I think there’s a lot of leverage here and I’ve been brainstorming what the best possible integration could look like here as well. Would love to get everyone’s thoughts on this.

Since ENS names are already ERC-721 tokens, we could theoretically utilize the existing infra being built to also provide validation of ENS names on the site

Hi Hamdi, this is great news!

I think that the basic thing is to decide what exactly will be authenticated using an ENS name.

It will be so attractive if Twitter accepts its own “blue check” verifying system with ENS partnership to provide verify Twitter accounts of eth domain name holders. It would be great and would gain more people to ens ecosystem

Yes, it would! However, we have to keep in mind that the semantics are not equivalent and this will probably cause confusion.

For example, if I verify johndoe.eth this does not mean that I am the famous person John Doe, and a blue checkmark next to it will confuse most twitter users. Especially if John Doe is already verified as @johndoe12345 on twitter.

What would seem plausible and a good idea is if your twitter name is foo.eth and you own foo.eth, they could show a ENS checkmark or icon next to it.

@hamdi, since you are aware of the internals of Twitter and an ENS delegate, could you please advise on how it would be better to move this idea forward? I’m open to working on a draft, but any feedback to make this more useful and targeted, would be great.

Adding to @vrypan’s precious observations:
The main thing would be to find a way for twitter to do this that doesn’t go in conflict with it’s blue verification badge. Let me show what I mean: 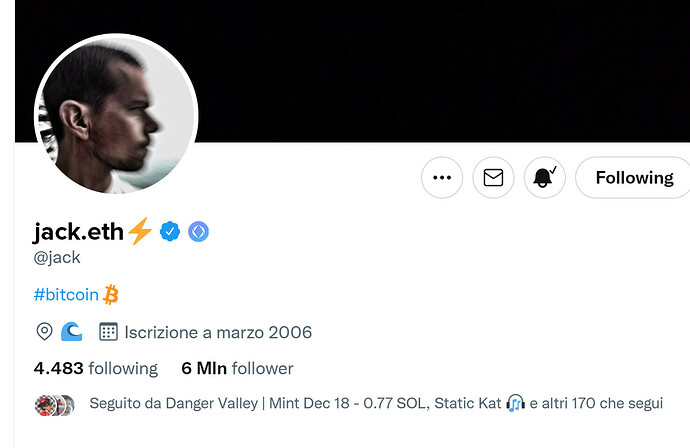 ens_badge_jack1478×961 126 KB
If we suggest this, I think would be a straight no, since it visually competes with the twitter verification badge.

Maybe, something like this would work better, though there are ux/ui issues that should be considered: 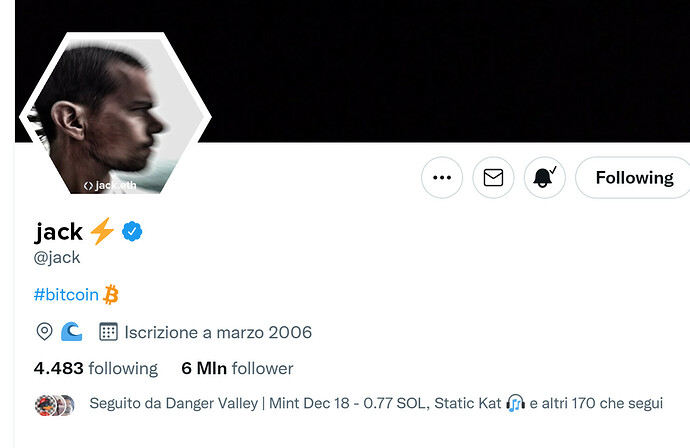 The main thing would be to find a way for twitter to do this that doesn’t go in conflict with it’s blue verification badge.

A simplified blue or black ENS icon would compete less with the Twitter badge. An additional to profile field could also work. Users would link their wallet through the profile editor. Their primary ENS name would then populate next to the join date with a gray ENS icon and thier dot eth name. This is less visible, but will seem less like an attempt to co-brand or an overt endorsement.

There is no precendence for similar integrations(?), so this is a big ask.

. There is mutual interest here. The DAO and core team could legitimately lend expertise in an effort to onboard Twitter into Web3 and Web3 Identity verification. By offering value to Twitter, instead of asking for an integration, they may be more likely to integrate ENS or SIWE anyways.