A map of all ENS contracts 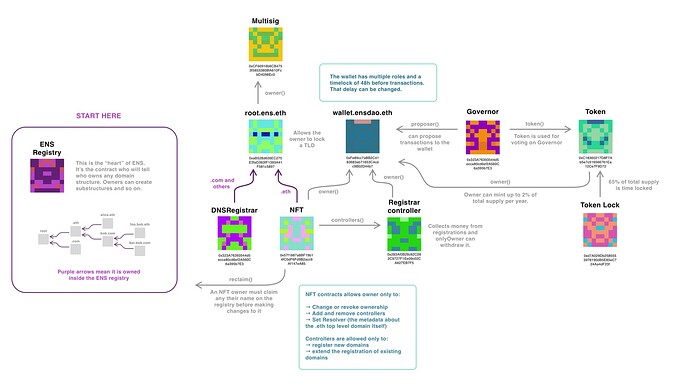 This is a work in progress and continuation of an earlier thread about threat assessments. ENS is made of many contracts and this is an attempt to clarify. It’s also has been a great understanding path for me to get more acquainted with all the governance changes. But most importantly it answers the question: what is the worst that can happen with my names? 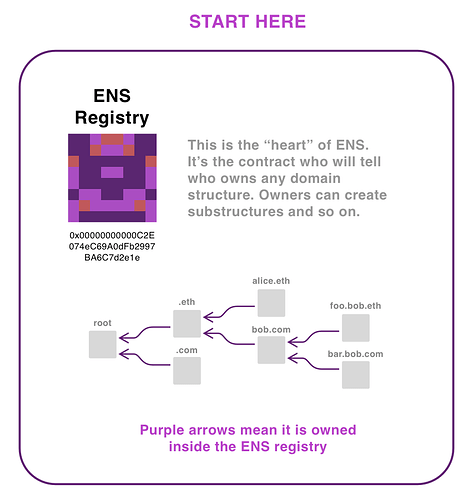 Let’s start at the ENS Registry itself. This is the most important contract, the root of where ownership exists, you can even notice this by the care that was taken in choosing an address with lots of 0s. This makes it harder to spoof and creates tiny gas savings. It’s the contract deployed on all chains including for testing. It’s a very simple contract that uses a nested logic: if you own the root, you can create top level domains, which allows you to create domains, subdomains etc etc etc. You can check who owns the root by going in the contract and asking it for the owner of 0x000…

It should return the root.ens.eth contract, which is just a contract that passes direct orders from its owner–unless the owner specifically forbids that. It has only one locked contract which you can check by passing the keccak256 of “eth”, which will allow to confirm that nobody, not even the root, can change the owner of .eth anymore.

You’ll notice that the owner of .eth is the contract I named “The NFT” because it is the NFT address you add to your wallet. You’ll also notice that the multisig is still the owner of the root contract, per design as requested on EP1. We should expect this to change for the DAO in the future. 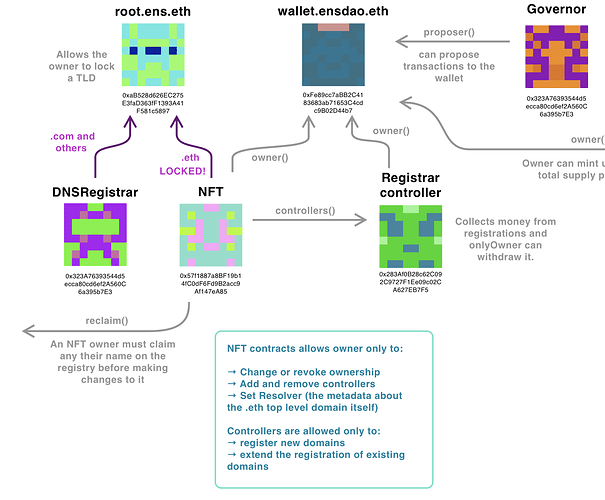 Why is the owner of .eth set to the NFT contract and not, let’s say, the dao itself? Great question. If you look at the code in the NFT you’ll see that when you transfer the NFT you are not at all changing the Registry, just the NFT ownership. But the owner can execute the “reclaim()” function which will allow you to set the owner of the NFT to the owner in the ENS registry. So the NFTs in your wallet are not actually the claim on the registry itself, but rather a special token that allows the owner to claim it.

The NFT contract is owned by the wallet.ensdao.eth which is the proper DAO. What can the DAO do to the NFT? It can call the following contracts:

What are controllers? They are addresses authorized to call these functions:

As you can see, there’s no option that will change the ownership of an address that has an owner. The easiest way to check for this without having to read the whole code is to look for instances of “onlyOwner” and “onlyController”, so you can verify it yourself. 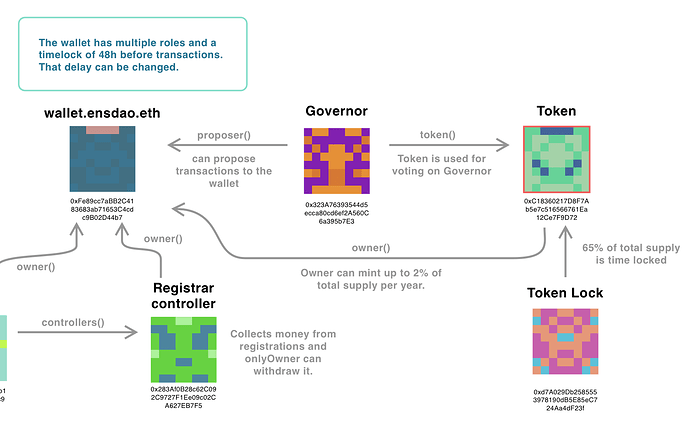 Finally for the governance side. Both the NFT contract, Registrar Controller and token contracts are owned by wallet.ensdao.eth. The only thing the registrarController owner can do is call it to withdraw the money.

The owner of the Token contract has the right to mint up to 2% of the current total supply, once a year. Notice it’s not “per year” but rather it’s an action that, after done, requires waiting another year. Meaning that if the DAO calls to mind 0.5% of new tokens for some usage, that will be the limit that year.

The token contract is then used as the token inside the governor contract, which is part of an elaborate governance contract from Open Zepellin that I haven’t done researching, but suffice to say it’s the thing that counts the votes and creates a 48h delay before they can be executed by the DAO. It’s also interesting to notice that 65% of the token supply, owned both by the DAO and in minor scale, some contributors, is still locked in the time lock contract.

I urge you to verify all these contracts by going yourself on etherscan and checking the code: you don’t need to read everything, but you can start by searching keywords like “owner” to understand what can happen.

So name ownership is quite locked down. Only a owner of a token NFT (or the previous owner until they reclaim it) can change the ENS registry. This is enforced by a locked contract that is the true owner of the ENS root, which itself is under the control of the multisig. Unless there’s some bug in either of those contracts, then no matter how the token holders vote, people cannot lose their domains.

One scenario that could be more sensitive is the controller. The DAO can add and remove controllers as will, so while it can’t do anything to existing names, it could stifle or limit the growth of ENS names. Examples that a bad controller could do:

It’s too soon for us to lock down controllers. There are probably more creative and clever ways to deal with registration than the simple $5 a month, which also requires an oracle and ties itself to the dollar. But we can add more than one controller, and we could transfer ownership of the NFT contract to a locked contract similar to the one at root.ens.eth, which would prevent a few actions or add more delays.

Thanks for breaking down all the contracts. Is it worth mentioning ReverseRegistrar as well?

Good idea. Although I don’t think it interact much with the others.

This is an amazing resource, thanks Alex! Would you be happy to see it as a page on the ENS technical docs?

One scenario that could be more sensitive is the controller. The DAO can add and remove controllers as will, so while it can’t do anything to existing names, it could stifle or limit the growth of ENS names. Examples that a bad controller could do:

It’s probably worth noting that the DAO timelock provides users with a time window to register and extend names that are affected by a change, too.

It’s too soon for us to lock down controllers.

I’m not sure we’ll ever be able to lock in a permanent controller; the controller depends on the price oracle, and oracles have a tendency to change from time to time.

This is a great idea! Another option would be to enforce a timelock not on adding controllers, but on removing them.

I’m not sure we’ll ever be able to lock in a permanent controller; the controller depends on the price oracle, and oracles have a tendency to change from time to time.

It would have to be a very simple contract like—and I’m not saying we should do this—burn 1 $ens get 1 year on your registration. This would create the scenario where there was a floor price for ens: registration was either $5 or 1 ens per year, so if the price of ens drops below $5 then people would start using it instead and therefore burning the supply. This of course can create some other bad effect.

But it’s an idea to prepare for the imaginary threat which might be unlikely. I think adding a long delay (even maybe up to a year) for removing controllers could also work as a nice protection.

I think adding a long delay (even maybe up to a year) for removing controllers could also work as a nice protection.

One risk with this is that if a bug was discovered in a controller, we would not be able to disable it for that long.

One risk with this is that if a bug was discovered in a controller, we would not be able to disable it for that long.

This is awesome to see, I had a vision of a ENS info graphic flowchart much like this for “non.coiners”. This will help to with on-boarding. cheers …creating a sudo buy and burn to make a “floor price” is neat my concern would be at the price end points of ENS both high and low. Drastic changes to the ENS price, the discount/premium to the user becomes a mute point and they will just use eth. As to floor price I suggest we make ENS socks . lol

Wow amazing, thanks for making this

, this will be really helpful for all frENS

@AvsA It would be great if you also list the list of ENS contracts so we can copy and paste that and see in etherscan also used to interact with the contract.

It’s very difficult to copy the address from the image

Here’s an update on the map, now including the functions that each contract can call 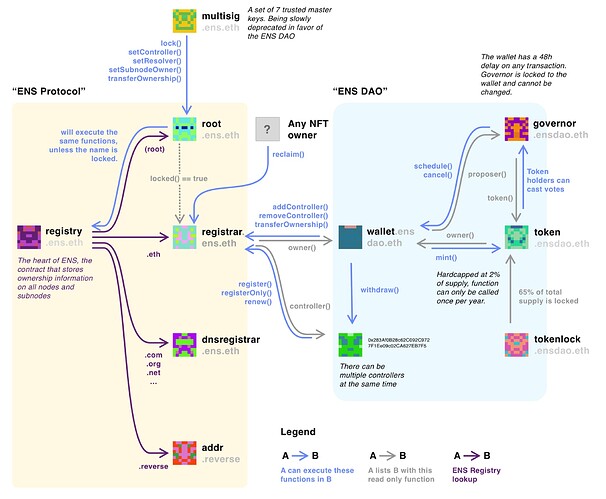 This is very clear! A couple of suggestions:

I’m using the names assigned at ens.eth subdomains. I’ve also found a few others worth mentioning like the dnssec and the priceoracle which I’m adding now

also, @nick.eth I’m not sure what to make of this:

One is the resolver that at resolver.ens.eth, the other for some reason etherscann says is where it will be migrated to, and another is the actual resolver being used on the app… 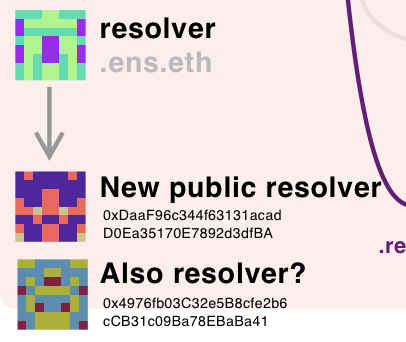 I’m using the names assigned at ens.eth subdomains. I’ve also found a few others worth mentioning like the dnssec and the priceoracle which I’m adding now

Right, but in the case of the controller, which doesn’t have an ENS name, it’d help to label it with something.

One is the resolver that at resolver.ens.eth, the other for some reason etherscann says is where it will be migrated to, and another is the actual resolver being used on the app…

resolver.ens.eth should always point to the latest one. Etherscan likely is pointing to a previous version.

Agreed! It might make sense to mention the .eth resolver specifically, though, since it’s used in the discovery mechanism.

You weren’t kidding when you said v3 is much better. Might go ahead and make this interactive with GoJS later

@nick I added the latest version as a PR here: https://github.com/ensdomains/docs/pull/93

I believe it’s ready for review. I can update it as the contract changes or new addresses are found.

I went down the rabbit hole with @AvsA’s mapping of ENS contracts since it overlapped with my ongoing threat analysis discussed in another thread. I cleaned things up into multi-layered SVG separating text, pointers, containers and labels across 4 layers but kept everything else as it was to a very large extent. I can now implement this as an animation by hacking the XML. I’ll post results down here as I have them; you can keep track of things on GitHub as well where the source SVG files also reside if anybody wants them.

You can find the GIF in high-res at ens.inplco.eth, or on IPFS

One minor nitpick on both layouts - I really think the controller and the price oracle belong in ENS, not in the DAO.