Are there any other crypto miners involved with ENS DAO? Or do you just want to ask questions about crypto mining?
I thought it would be nice to have a space to discuss mining, answer questions to anyone curious about it, share resources, and network with other miners.

) since about February, and slowly trading for graphics cards as I was able to find them. Lots of phones calls and time driving to other cities. That was actually how I got really pulled into “web 3” to begin with, excluding bitcoin. Almost all of the projects that I support and coins that I hold were acquired by first mining my own eth and then trading directly for them.

My current set up is:

The whole set up usually averages about 500 MH/s hashrate, and I intentionally built it to be as power efficient as possible, so the whole thing draws less than one kilowatt. I run all of the 3060 Ti’s undervoltage too, which keeps temperatures well under control, even below what they would hit while gaming.

With ETH’s switch to proof-of-stake always on the horizon and the constantly growing mining difficulty of the Ethereum network, I may be downsizing my set-up and/or switching to different currencies soon. I have also experimented with mining Ravencoin, but the temperatures are much harder to keep down using their hashing algorithm.

Recently I have been keeping an eye on Raptoreum and may start dual mining (CPU & GPU) it and something else soon. Other various details: The mining pool I use is Ethermine and mining software is T-Rex miner, although I will probably be switching to HiveOS soon. I have several great resources and analytic tools that I would be happy to share if anyone is interested.

Wow! Your setup sounds rad! I’m just about at step 1 and hope to be advancing at a similar pace: I have one RTX 2070 mining rig that I started running two weeks ago… so not nearly enough.
However it’s opened my mind to a lot of possibilities and given me an opportunity to learn more about crypto.

The more I learn the more I want to be involved and see what I can contribute. I’m currently just mining ETH and with the ETH2 upgrade and the pending difficulty bomb I’m not sure it’s sustainable for just my little rig. Hopefully I can figure out something else that I believe in and want to mine by then. Maybe Raven is the answer?

At the very least I’d be very down to join a mining club ^.^

Nice to meet another miner 'round here.

What software and mining pool do you use? And is it one 2070 you’re running or more? Here are a couple of my favorite resources for monitoring the state of the network:
Watch the Burn (real time block & gas data)
What to Mine (the best resource for mining imo)

Oh my gosh those resources are really helpful! Yeah it’s just the one rig. I’m also using TRex and Ethermine mining pool. I tried a few other options but Trex worked the best on my rig and was the easiest for me to edit.
I can’t wait to learn more, especially because my hash has been atrocious! The hashrate has been fluctuating so much since the last Trex update I know I need to do something about it

What is your temperature range and do you overclock/undervolt? The hashrate will depend on the difficulty level, which goes up or down depending on the total hashrate of the network and the amount of gas being burned. It has been really erratic this week

Here is a good resource for checking that:
Ethereum Hashrate Chart 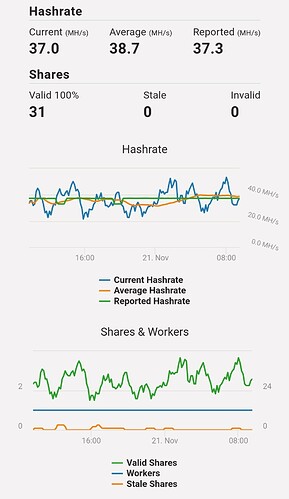 Screenshot_20211121-094517_Chrome1080×1864 145 KB
Lol I think I just feel inadequate compared to a lot of other people I’ve seen on the Trex discord. But realistically I’m one small person so I’m just trying to participate and learn more anyway.

But yeah, I haven’t tried messing with too much of the temperature stuff or energy usage. This may sound dumb, but; I’m in a really unique situation in which I don’t have to pay for electricity, I’m in an extremely cold climate so as long as the temperatures aren’t at melting level it’s not a concern, and the amount of “bandwidth” I’m using to mine is less than I use on a daily basis.
So I feel like I should be taking the chance to give something like this a shot.

At least until the difficulty upgrade, by then I’ll surely have to figure something else out. Are you considering switching to mining something else when that happens or with your set-up do you think it won’t interfere too much?

Since the London upgrade went live in August my mining income has gone down about 50% (in terms of eth that is… it is actually about the same USD because eth has gone up) so I will probably start downsizing over the next year and selling my cards. It is really apparent that most of the eth community doesn’t understand or even care to know how their network is secured, and doesn’t understand the importance of Proof-of-work to maintain the integrity of it. Especially now that the transaction fees aren’t even given to miners, they are burned. The upgrade was sold as “up to 90% lower gas fees” which definitely hasn’t happened. Miners are really unfairly demonized… but I won’t go any more down that tangent.

I’m mining ETH with my 3080 FHR, im getting 95.1 with undervolt. A friend of mine helped me reach that as I was getting like 85 before and was running waaaaay too hot.

I’m on ethermine using … gminer? i can’t exactly remember… buddy has it running in the background like a windows service or something so it runs automatically on start up.

I would love to get more cards but i am rather apprehensive about selling my precious ETH. Especially since all the cards you can get now are mostly LHR. And with 2.0 coming, i don’t want to be stuck holding all these extra GPUs.

I don’t pay for electricity as its incorporated into the rent. So its potentially lucrative, at least on a small enough scale.

I’m personally on the fence when it comes to the PoW vs PoS. I mean I’m hoping PoS takes alot longer before it happens so I can reach my ETH goals. I really would like to have 1 ETH by Christmas (bought and or mined) and 2ETH before PoS.

@daylon.eth im curious to what you will mine after PoS if anything (i realize you’re selling off cards BUT doesn’t mean you’ll give up completely right?

@daylon.eth im curious to what you will mine after PoS if anything (i realize you’re selling off cards BUT doesn’t mean you’ll give up completely right?

It’s hard to say because nothing else really stands out at this time. If Eth switched to PoS tomorrow I would probably switch to mining Ethereum Classic even though I feel like it is pretty much a dead project. There’s a chance it could see a second wind when all of the miners currently mining eth need something new to mine. There’s a great Youtube channel called Bits Be Trippin’ who has been mining since probably 2013 and this a common thing he talks about… where will all of the current eth mining power go when they can’t mine eth any more.

The thing that annoys me the most since EIP-1559 is that I have to pay gas to even collect the block rewards I have earned from mining. Like I’ve already sank tens of thousands of dollars into hardware and electricity to secure the Ethereum network, and I get repaid by having all of the fees from transactions that my rig has processed and verified (requiring huge computational power and wear on my equipment) just be sent to a blackhole… allegedly “to make eth deflationary” and “lower gas fees up to 90%” both of which haven’t happened at all… and on top of that, I also have to pay to even claim my block rewards from mining said blocks. This amounts to about $200 to even get my 0.1 ETH reward approximately every ten days. I’m getting really tired of it and I will happily start mining something else when another profitable option becomes available.

I’m in the same boat (all be it at a smaller scale lol) but the gas fees to collect my rewards are so outrageous I’m essentially turning this project into a theoretical savings generator. I’ve got some ETH2 staked on coinbase and do far I’ve earned… about 13 cents! Hahaha so my mining operation is turning out to be about equally as profitable.
The looming switch to PoS is like the sword of damocles for all of us who’ve been mining any ETH so I imagine when it rolls out we’ll all need to jump to something else. I’m curious to see what the larger operations have in mind, but for the small scale workers in the pools a switch to ETH classic seems logical.
That site you linked earlier that lists the prospective computational load for a lot of different cryptos was really enlightening. Personally It’ll depend on what I think my rig can handle but also what other pools have low enough fees and easy enough access too. Definitely food for thought

Mining Eth is becoming less and less profitable every day, and to make it worse, the crazy transaction(gas) fees are just burned now. I’m thinking about using some profits to set up another rig to mine Ravencoin, and maybe start transitioning my current set up over to that too. It’s not the most profitable option, but the developer community seems pretty active and it has held it’s value pretty well for the last year or so. Also easy to swap on exchanges. I am 100% sure something new will fill the void that Eth leaves behind when it switches to Proof-of-Stake as the most profitable and useful coin to mine.

Fun new problem; weather patterns affecting my need to change settings.
I live in the frozen north so even if the gpu is running a little hot the ambient air temperature helps keep it in check…
Until now.
Crazy winter weather up here has had massive melting and warming winds that are not only destroying the ice on the roads in dangerous ways, but now I needed to devote time to tweaking my fan speed and temperature parameters.
It occurs to me though that if I’m having this kind of issue it might be the inverse for some of you. Could crazy winter weather mean you guys can relax gpu temperature limits?
Just a query!

It has been an unusually hot winter here too, but the main thing I do to keep my temperatures under control is turn off any heat in my house and put my rigs near a slightly opened window. The cold air that comes in across the rig is enough to keep it running at a good temperature, and my house stays nice and cozy without using central heating at the same time. Outside humidity is something to be a bit careful about though.

My current setup is as follows

Not bad! My laptop has a 1060 6GB and it surprisingly pushes around 25 MH/s sometimes. Decent underappreciated mining card for the price, if you can find one. Did you sell the 1060 3GB or are you mining anything else with them? The eth DAG is already pushing 6 GB so that’s a bit concerning.

I wish I had hardware to mine with as I don’t have to pay for electricity where I stay and wouldn’t be a burden.

I actually decided to do an experiment and switched 2/3 of my mining power to Ravencoin on January 2nd, and I’m going to mine it all of January. In an interesting coincidence, the day after I made that switch, Ravencoin value up went up ~30%.