I see your PoV. Whenever someone is that defensive and starts just talking about the other person as a deflection, I immediately assume the opposite. Thus it is settled the need for an audit.

My counterargument that it doesn’t solve the process issue might be shortsighted. First, we need to know where money is going before we can budget it.

I agree with u. OP @Sad asked about the money and where it is going and I checked out the etherscan on this

Here is one of the addresses etherscan that is not under the control of any workgroup but has been paying out funds to certain individuals.

My guy Zadok received 3000 ENS worth $45,000 today from the private core company that is not covered by DAO vote or any multisig. You can see what it is happening here I feel and why people be so defensive

You can see every transaction to/from the DAO wallet here . The wallet is controlled directly by onchain votes, so the only way for any funds to be disbursed is via a publicly declared vote.

But this aint true though. Some funds go from working group multisig which is not by vote I reckon. That guy @inplco who got booted defended the private core team and said that the company gave people money from their own wallet, but this money had gotten funded by the DAO though. Very clever I reckon. Take money from DAO as contractor, make it private, spend it without oversight as u like. If @theaccountant didn’t pick the txn we’ll never know why people be acting so defensive. You gotta see it to believe it, inner circle be handsomely rewarded for their defence 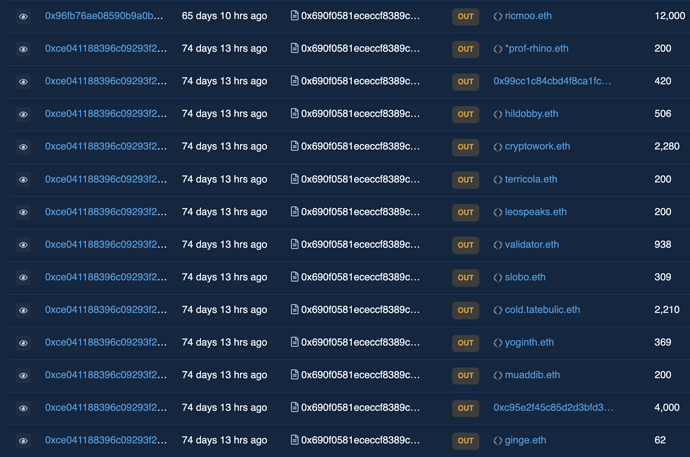 Please inform yourselves on the token allocations particularly for Contributors and Active Discord users in $ENS Token Allocation (Claiming Opens Nov 8) — ENS. If you have any further questions or if you see anything irregular in the transactions list people have referenced, ask away and hopefully someone who is more knowledgeable on this topic can answer.

In regards to the “irregular token transfers” to Zadok, 74 days ago (which is within the timeframe for what Brantley has claimed to be a 6 months cliff - link below) that would have been related to the vested tokens for Contributors/Active Discord users. There is no requirement for voting on this as it has been promised during the token launch.

I highly recommend in the future posts for everyone to be objective and provide references to their claims that can help others be informed.

Thank you for the reference, but this aint related to the vested tokens Im afraid coz those funds come from the DAO wallet and not the private contractor’s wallet. Check out the comment by inplco, is what he said: Bring in outside Auditor in so the masses see where they money is going - #4 by inplco

this money aint from the dao I think

Check this: Contributor airdrop?
It says it was someone named alishas idea and not from dao wallet. if it aint from dao wallet then it is not dao money. simple as that. some money was dropped randomly on 20 odd people who the private company thought were good to them I suppose. I am not alleging but it seems like it coz why else people be so defensive in explaining expenses

I don’t think “anyone” was being defensive, if you’re referring to Zadok he’s only asked if you could stay on topic which was right. You’re doing fine now.

@alisha.eth is part of the core team. If you want you can ask her here about that transaction.

I feel like initiatives to reward people who have been good to the DAO should come from the DAO and not some private contractor employee. it seems unusual that one person has so much authority on money in a DAO. I just wonder why this money didn’t come from a working group. also it was not announced and feels like hush hush, you feel me. i mean the total in those 20 txns is like $300,000. that aint small money but this is big money dropped without oversight to folks working for the DAO by a private entity who seem to be establishing monopoly

I think your conclusion is premature. I would wait for those people in question to give their input before making assumptions.

I have been accountant long enough to know what this is about but I admire your neutrality until further evidence. dao is good to have you

when I get more ENS tokens, I will delegate to you

P.s. I think everyone is on holiday (weekends) so there might not be a response for a bit.

I just wonder why this money didn’t come from a working group.

The token distributions you are referring to come from TNL’s contributor token allocation and were earmarked for contributors at the time the DAO was launched.

These tokens were distributed, at TNL’s discretion, to contributors who had done extraordinary work in helping to establish the DAO.

Thanks for response alisha but respectfully that isnt what I was asking. That much has been established already by another user in their comment that private company TNL gave that money out of their pocket. But TNL gets all of its money from the DAO I think, so it is like the DAO is the one that really paid in the end. It is like giving what is likely too much money to people escaping the DAO process and I would kindly like to know why. Any auditor will put a big question mark on this

This is incorrect. The tokens you are referring to were never controlled by the DAO, but were instead a part of TNL’s contributor token allocation. TNL had, and continues to have, discretion to distribute the tokens it controls.

I didn’t say DAO controlled the tokens. I said DAO gave TNL the tokens. I want to like emphasis the ethics, not a technicality that is being used to escape oversight. Discretion is like a big grey area and native to centralised world where it is used to drag bad stuff under the rug. It dont belong in a decentralised space where transparency should be priority over discretion. TNL could still delegate the process of recognising extraordinary contributions to the DAO but it want to walk the darker of the grey area. This is when people start using ‘discretion’ as escape. Ethical DAOs don’t use discretion. People need to look deeper I feel. I guess someone will look and probably find some other infringement. Someone should look into IP and TM status of ENS at least

That is also incorrect, the DAO never owned those tokens in the first place. 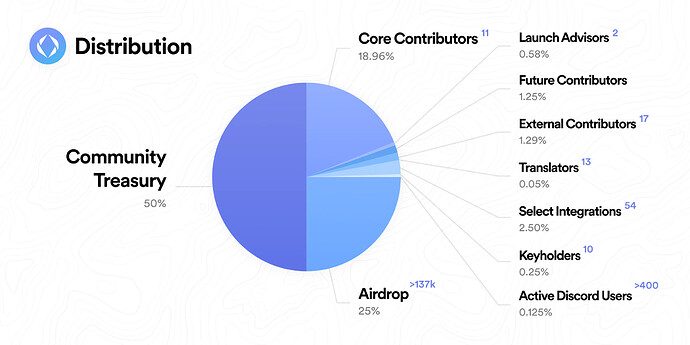 The vast majority of the allocation was to the DAO treasury, the airdrop, and the timelock contract for core contributors. The 0.125% portion for “active discord users” was controlled by TNL from the very beginning.

From the list of people in those txns, I can see that you also received major money. It dont surprise me that you want to defend it. This only shows how allegiance is bought in corporations. Like I said, we know it was TNLs money and their convenient discretion but it could just as easily be DAO’s money and transparent. Just because you can doesn’t mean you should. Hiding behind technicalities and discretion doesn’t work in a transparent ecosystem. Everyone knows how this looks

The 0.125% portion for “active discord users” was controlled by TNL from the very beginning.

Where can I confirm this? The drop 74 days ago was 20 something users not 400+ discord users.

But that’s not what you said, and others in the thread have had to correct you multiple times when you said things that were not true.

There is no hiding behind anything, everything is on-chain and multiple people in the thread have explained it all? You’re trying to make a mountain out of that 0.125% “discord contributor” allocation molehill. I don’t know what else we can tell you, there are the facts and on-chain transactions.

The original Discord airdrop was done inside of Discord itself, all people who verified themselves and got one of the server roles before the 10/31/21 snapshot were eligible to claim that. There were private channels created for that and all eligible people were automatically added to those channels and given instructions on how to claim them. That was back in early November, 2021. Not everyone claimed them though, so there were some leftover, and TNL distributed the rest at their discretion (that was the “74 days ago” piece).

I don’t know for sure, but I think everything that was not allocated to the DAO Treasury (50%), the community Airdrop (25%), or the Timelock contract (18.96%, plus maybe some of those other small percentages?).