Way back in December, I made the following comment in our now infamous ENS Name Normalization thread:

After taking some time to look into it, I believe that an onchain implementation of “ENS Name Normalization” (as proposed by @raffy in Draft ENSIP - Standardization of ENS Name Normalization) is both technically feasible and financially economic within a mainnet contract.

As a small proof of concept, I built github.com/royalfork/ens-ascii-normalizer, which you can try out on etherscan. ENSNormalizeAscii contains the following functions:

Note: This contract only supports ASCII-only domains. If a domain contains non-ASCII characters, namehash/lookup will revert.

Not sure if ENSAsciiNormalizer is the first mainnet “string → owner” contract for ENS, but I find it nice to perform direct on-chain domain lookup/validation without the need for intermediary client-side code (it’s also nice to check for ZWJ characters directly on etherscan). If there’s any interest in a “full unicode normalization” contract (and we can collectively stomach the ~$200,000 in fees it would take us to get there), I can put together a more detailed RFP. Would be pretty cool to implement something like this, and it could vastly simplify 3rd party integrations (instead of asking etherscan, metamask, opensea, ethers.js, everyone else to “update their code” everytime ENS normalization rules are updated, we can just point them to our easy-to-use on-chain normalization function and be done with it).

Onchain normalisation would be really useful to have; it would mean that implementations can start by using it, and transition to doing it in the client library for efficiency later, if desired.

The costs to upload the tables will be substantial, but I think that with the preprocessing and compression work @raffy has done, it’s probably viable for a much smaller sum.

This contract maintains a list of all canonical/allowed emoji sequences, and only allows emoji within that set. ZWJ characters are only allowed within emoji sequences, and are only allowed in those emoji sequences that specifically use them, where they must match the allowed sequence verbatim. There’s also some special handling for 0xFE0F such that only fully-qualified emoji are returned as “normalized”, but the minimally-qualified, without 0xFE0F, is used to compute the namehash/labelhash (meaning this is fully backwards-compatible with existing emoji registrations). 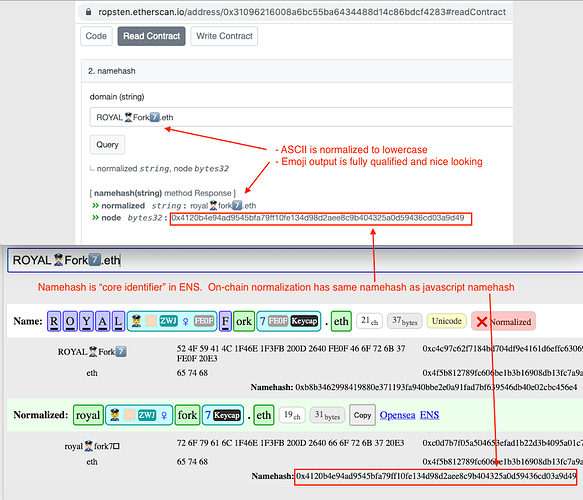 Note: For this deployment, I only added

to the emoji allowlist…all other emoji will revert if you try and namehash, because they aren’t in the allowlist.

@royalfork - Awesome work. Thanks for taking the time to share the concept and PoC it.

@slobo.eth - Could we get this on the agenda for this week’s Ecosystem WG meeting? It’d be great to discuss this synchronously.
We’re back to 7pm GMT on Monday this week, correct?

Here is an initial version of an efficient emoji parser library that should be a drop-in for your contract.

I deployed a contract using it here and populated it.

It requires less than 1 eth in gas to deploy and supports all Unicode 14 emoji. (If the upload mechanism is exposed, it’s also upgradeable, but since it’s so cheap, its probably better to seal it and redeploy for future Unicode updates.)

If you use as a library, you’ll need to call upload() with the following 10KB payload, broken into (2) chunks:

The chunks are 6 byte rules for state transitions which follow this tree:

Here is a test contract that I’ve set the above contract as the emoji parser and a BasicValidator contract that implements /^[a-z09-_.]+/$ as the validator.

Outstanding! Do you have an estimate of what it would take to extend this to match your entire normalisation function, not just Emoji?

It depends on how IDNA and NFC are implemented. If you implement them verbatim, it will be very expensive to deploy like royalfork estimated. However, there’s probably a partial mapping that would give a lot of bang for the buck.

I think there is a possibility of using NFKD → Apply the small number of differences from IDNA 2003 → NFC, but I’d need to verify that this is the same thing as IDNA 2003 → NFD → NFC. You could avoid a whole lookup table with this approach.

If, for the moment, we reject combining marks and composite characters (so NFC isn’t needed) then my emoji parser + an efficient IDNA mapping would be a string → string implementation. All the effort would go into efficiently compressing the mapping.

Otherwise, I think the most important contract is an NFD/NFC implementation.

You can naively encode the valid output character set into a bitmap for 700 storage slots. Combine that with the emoji contract above + NFC quick check and that’s a gas efficient function for determining if a name is in the normalized form. I can demo this immediately once I have an NFC implementation.

I also think a few separate simple validators for each script would give a lot of coverage (and more could be added over time). However, this approach requires a mechanism for looping through the set of validators to find one which returns true for your name.

I mentioned in the other thread, you could store the address of validator on-chain for the name you verified, making all future validations only two SLOADs, node → validator address → is valid validator address, but this requires extra infrastructure.

If, for the moment, we reject combining marks and composite characters (so NFC isn’t needed) then my emoji parser + an efficient IDNA mapping would be a string → string implementation. All the effort would go into efficiently compressing the mapping.

This seems to be a reasonable starting point. Are there existing domains that use combining marks or composite characters?

5K names have combined characters (NFC != NFD.)
171 names have two combining marks that could be reordered.

Maybe that is a good idea, just compress the IDNA part and disallow the codepoints that need NFC. That’s 99% of names unless I’m forgetting something.

@adraffy/ens-norm-research has an improved contract that only needs 360 storage slots and no longer requires the skipFE0F option, and the code that generates the state payload.

Since the IDNA table is stable, a huge chunk of the valid and single character mappings can be compiled directly to code. 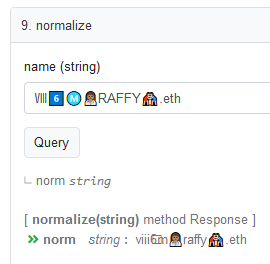 Should work for every name except those with combining marks or characters that compose (like à).

Edit 2: I deployed a more gas efficient version that avoids using uint24[]. It also has a beautify() function.

Although I have little idea what you’re on about half the time here, your commitment to see this all the way through is admirable, @raffy