Following the approval of EP2.2.5, Karpatkey has been appointed as the endowment fund manager of the ENS DAO. In order to move forward with the execution of the proposal, it is necessary to establish the initial conditions and the required steps to create the endowment.

Based on the last meetings between Karpatkey and the ENS stewards, the following paragraphs are intended to openly share the ongoing conversation, namely to:

In order to establish the initial scenario, the following topics need to be addressed and defined:

It is also necessary to think about the management of future income, newly converted earned ETH and endowment rebalancing. These topics will be addressed in detail in future posts.

As of the day of this writing, the ENS DAO account balances are as follows:

According to the plans outlined on the Routine Treasury Management post, the DAO intends to build a separate fund whose size should be enough to cover 2 years of runway, which is estimated at $16,000,000 USD, denominated in USDC and/or DAI. There is also a current draft proposal to convert only $12,000,000 to start. Regardless of the decisions made on these two independent proposals (whether they are executed or not), the endowment will contain the entire treasury less $16,000,000.

The $16M runway will come from converting earned ETH. The remaining excess ETH will be sent to the endowment, where it will also be converted to USDC as part of the endowment fund.

After seeding the 2-year runway fund

In addition, considering the significant exposure to ETH given by the unearned ETH sitting on the controller’s wallet, it makes sense to also convert the ETH holdings in the DAO’s wallet to USDC. Adding the remaining earned ETH after seeding the 2-year runway fund and the ETH in the DAO’s wallet, a total of 7,611 ETH will be converted to USDC.

After executing the proposed transactions, the resulting balance is as follows: 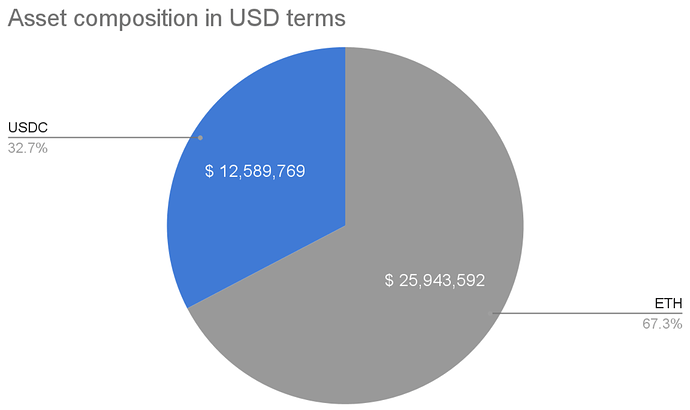 Although the total funds available to build the endowment amount to approximately $38.5 MM USD, it is prudent to take a cautious approach, starting with a portion of the funds and gradually building up to 100% of the funds, provided Karpatkey demonstrates their capabilities and fulfill their commitments outlined in the Fund management proposal.

Therefore, the proposal is to start with 20% of the available funds and deploy a subset of yield-generating strategies that will be scaled up as the endowment grows. The remaining funds will be injected in 4 equal monthly installments until 100% of the funds are sent.

Stage 1: 20% of funds to initially seed the endowment

Having defined the initial endowment size, the asset composition and the expansion pace, the list below exhibits the strategies that will be deployed on Stage 1.

Additional context and information about the strategies:

At the time of this writing, if the presented strategies were implemented, the annualized results for Phase 1 would be as follows:

Given that the DAO has a considerable exposure to ETH (unearned ETH represents ~48% of the current balance without considering ENS), the best approach is to convert 100% of the generated rewards into stablecoins and re-deploy them onto USD-neutral strategies, growing the stablecoin existences upon time.

Before being able to deploy the presented strategies according to the initial scenario, the additional ongoing audits on the Zodiac Roles Modifier should be completed. Two independent auditors are finishing additional audits for the smart contracts being deployed:

We will keep the ENS community updated on further developments.

Please see my response (here) regarding this proposal.

Thank you for the update!

I don’t think this needs to be put to another social vote; the community have already voted to accept Karpatkey as endowment manager. After appropriate discussion, I think the initial allocation could go directly to an executable vote.